UC researcher on worst NSW bush fires in a decade

A University of Canterbury (UC) researcher says the current fires raging through the state have devastated whole communities. 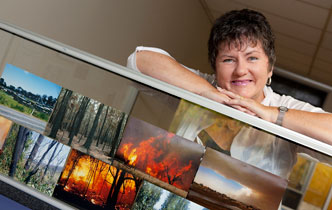 A University of Canterbury (UC) researcher, who has been studying how people living in bushfire prone areas of Australia respond to warnings, says the current fires raging through the state have devastated whole communities.

She says hundreds of homes and properties have been lost in the worst fires in a decade in NSW.

"As we experienced with the 2010 and 2011 earthquakes, these fires will displace families and there are huge recovery tasks ahead for many NSW communities. As we know in Christchurch, this all takes much longer than anyone imagines and affects people, families and children in many ways.

"There are over 100 fires and incidents listed on the New South Wales Rural Fire Service website and 14 of those are rated as being out of control. Fire crews are at the mercy of the weather and especially the wind direction and speed.

"Once a fire gets to a certain size, it creates its own weather conditions. The temperatures are predicted to soar again ahead of rain tomorrow(Monday).

"Bushfire conditions are a combination of temperatures, soil moisture, fuel load, wind speed and direction and humidity. The past decade has seen much warmer springs and summers and the present conditions were a result of an early wet spring, producing lots of fuel, which then dried out in the extremely hot temperatures the region has had for the past month.

"The biggest contributor to the unique conditions that make Australia the most bushfire-prone country in the world is the Eucalypt or gum tree. Its leaves produce oil which, in extreme temperatures evaporates and ‘hangs’ in a combustible cloud above the bush canopy.

"This often ignites kilometres ahead of the fire front. Just as dangerous is the bark of many of the species: the bark is ignited, peels off and is blown by the wind. Most fires are started not by the fire front itself, but by the burning embers.

"Of course, bushfires that burn in the bush are not dangerous. They only become disasters when people move into it,’’ Mackie says.

The initial warnings for the fires were only rated as severe, not extreme or catastrophic, and the authorities admit that the conditions, especially the strength of the winds took them by surprise. If there is any good news from this, it is that despite this, no lives have been lost.

Mackie’s PhD has been supervised by Dr Donald Matheson, UC’s senior media and communication lecturer and her associate supervisor is Professor Jim McLennan, from LaTrobe University in Melbourne. Her thesis will be finished in December and her research is already underpinning practical work in Australia on how people understand and respond to warnings about fire.