University of Canterbury researchers have found that southern fish can cope with warmer waters, giving some hope for the future of the Antarctic environment. 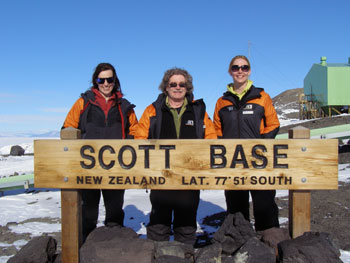 University of Canterbury researchers have found that southern fish can cope with warmer waters, giving some hope for the future of the Antarctic environment.

Professor Bill Davison (Biological Sciences) has been rigorously testing fish in warmer waters and has discovered most cope and adapt extremely well. Waters around the Antarctic Peninsula have risen in temperature by about 1degC in recent years.

"I have been pushing fish to a 5-6C temperature change. In the short term, Antarctic water temperatures are not going to change by this much. Ultimately, things always change, and as temperatures increase so the distribution of animals in the marine environment will change.

"My fish could well find themselves with a much more restricted distribution range, while other fish could move in and take their place.

"But probably one of the greatest immediate threats to the environment is the invasion of crabs into Antarctic waters. Temperatures have increased, but not enough to kill off the local fauna. However, it has risen enough that crabs, which have previously been unable to survive in this region, can now survive.

"This summer season we spent about seven weeks at Scott Base. We work in spring because we need to get out onto the sea ice to catch fish and by December it is getting too warm. This season has been very warm, and if you look at the Scott Base web cams you will see that the sea ice in front of the base is now a series of pools and off limits."

Professor Davison said his research team this year included master's student Charlotte Austin and PhD student Sarah Coxon. He has been studying Antarctic fish for many years and has had 23 seasons on the ice looking at climate change and fish physiology for about 10 years.

Most of his work is at Scott Base but he has an Antarctic aquarium on campus.

"The bulk of my work has been on one species of fish, borch, which acclimates to higher temperatures and radically changes its biochemistry and physiology.

"This season I concentrated on a different species, emerald rock cod, which does not acclimate quite as well. Fish survive around Antarctic because they produce anti-freeze which stops their blood freezing.

"All fish in the Ross Sea are protected under the Antarctic Marine Living Resources Act and I need to obtain a permit to catch them. My fish are not endangered because they have never been exploited, and me taking a few fish is not affecting populations. However, there is much debate about the state of the closely related toothfish.

"Waters around the Antarctic Peninsula have risen by about 1degC. This doesn’t sound much, but actually represents a major shift in terms of the upper limits of some Antarctic animals."