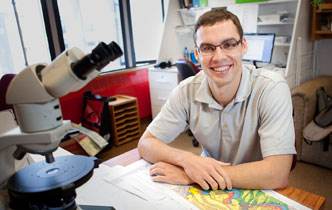 A University of Canterbury researcher looking at organisational resilience and physical impacts of the 2010 and 2011 earthquakes on farms has found stress to be one of the greatest challenges.

"Our surveys have also reported that it took some time for the effects to take hold. From October 2010 to June 2012, the reports from farmers citing stress as the greatest challenge doubled. We believe the increase in stress is likely a product of exposure to on-going aftershocks and the challenges of recovering from the disaster.

"We surveyed 54 farming organisations, asking farmers to describe how the business was disrupted, what resources were helpful in mitigating the effects of the impacts, who they relied on for help, how the bottom line has been affected and what was the single greatest challenge they faced.

"We wanted to research the impact on farms because we were unsure how earthquakes affected farming organisations. No one has looked at this topic before in a developed nation.  We know much more about how cities are affected and some of the lessons learned from Christchurch seem to hold true in the rural areas. But a lot of the challenges are unique to the rural areas or the farming industries.

"In most cases, the farm's main income-generating assets, such as pasture and animals, were not disrupted. Production and income remained relatively unaffected. As a result, there was not much financial legacy of the earthquake-related impacts by 2012.

"Comparatively, these effects contrast to what can occur during a major drought event where decreases in feed production forces de-stocking during non-optimal times. This can have a legacy for months to years. This scenario has been forecast by many commentators following the recent drought throughout New Zealand.

"In mitigating and recovering from the effects of the earthquakes, we have found that farming organisations often utilised their informal networks for both organisational and psychosocial support. The use of community members, neighbours, friends and family has helped the farms and their rural communities recover.

"Overall, our results suggest that psychosocial impacts in rural communities are important to monitor – and undertake research on – after disasters,’’ says Whitman, whose research was supervised by Dr Tom Wilson.