Christchurch soprano singer Amina Edris, who graduated from the University of Canterbury's (UC) School of Music last year, has won the 2013 McDonald's Prize. 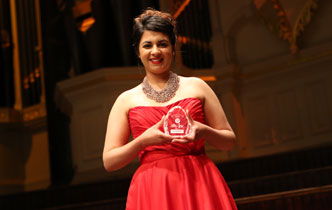 Christchurch soprano singer Amina Edris, who graduated from the University of Canterbury’s (UC) School of Music last year, has won the 2013 McDonald's Prize, in the largest aria competition in the Southern Hemisphere.

Edris was taught at UC by Dame Malvina Major. In preparation for her tilt at the McDonald's Prize, was coached, both in Christchurch and in Sydney, by Sharolyn Kimmorley and current teacher Dennis O’Neill.

School of Music director Robert Constable says the winner of the award is usually guaranteed a career as an opera singer. He says her success was an incredible achievement.

Edris says the existence of competitions such as the Sydney Eisteddod McDonald's Operatic Aria is incredibly important for any young singer looking to start a career in opera.

"Many singers have high hopes and dreams to go overseas to further studies or to audition and it is often a struggle to find the funding to make it all possible as opera is such an expensive field.

"I'm very honoured and grateful to have been named the winner of this year's competition as the scholarship will enable me to return to Wales to further my studies at the Wales International Academy of Voice as well as helping me tremendously with the costs of auditions for Young Artist Programmes around Europe and the US,’’ Edris says.

After graduating with her Bachelor of Music degree at UC last year, she has been studying in Cardiff in Wales.

Her voice coach and accompanist, Sharolyn Kimmorley is a leading vocal coach having been head repetiteur at the Australian Opera. Kimmorley is a regular visitor to Christchurch where she is involved both at School of Music and the Opera Club.

Constable says the McDonalds Operatic Aria Competition, is arguably the most prestigious competition of its type in the Southern Hemisphere.

"To have one of our graduates win this famous Australasian award is a great achievement for Amina and is a testament to the training and encouragement she has received at the School of Music at UC.

"Amina has a very big talent and is a very hard worker and I am certain that this success will be only the first of a series of wins for this young singer.’’

Remember too, that 2011, which was Amina's final year at UC, was traumatic and difficult for all of Christchurch, and this, of course, included all students at UC. This result is a fitting reward for an exceptional young performer,’’ Constable says.

Edris sang regularly at the Christchurch Cathedral as a featured soloist and with the Cantores chamber choir conducted by Brian Law. She is a recipient of the Sir Howard Morrison Scholarship, the Dame Malvina Major Foundation Arts Excellence Award, The Inspire foundation Scholarship and the Adastra Scholarship Award.