A University of Canterbury researcher has worked with the Māori community in a bid to fight Type 2 diabetes, which is a serious health problem for Māori. 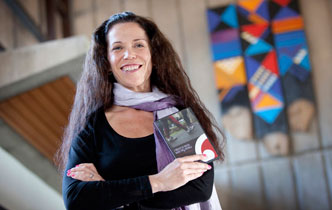 A University of Canterbury researcher has worked with the Māori community in a bid to fight Type 2 diabetes which is a serious health problem for Māori.

UC PhD student Alison Farmer has produced a documentary, to be launched next month, which will be distributed among the Māori community to highlight the seriousness of the disease.

Type 2 diabetes is almost three times more common in Māori than non-Māori who are diagnosed younger and are two to three times more likely to develop complications such as eye disease, kidney failure, strokes and heart disease.

Mortality rates for Māori with Type 2 diabetes are seven times higher than for non-Māori. The Ministry of Health estimates that diabetes increased by 78 per cent between 1996 and 2011.

Farmer is an Emmy-award winning documentary producer/director and her DVD has the support of Māori health workers and is the result of two years of collaboration with Māori health professionals and the community. The DVD - https://vimeo.com/68196701 - will be launched on 5 July.

"The DVD has been produced as a result of extensive consultation and research with the Māori community and health organisations, reflected in part by the endorsement from Ngai Tahu chairman Sir Mark Solomon who features in the DVD, titled I Want to Walk with my Moko: Preventing Type 2 Diabetes.

"If the low levels of knowledge of diabetes can be attributed in part to the failure to reflect Maori cultural practices, this study tests whether community cased participatory research is an effective approach to address and overcome this problem.

"My research approach has not been implemented or tested before in any health education campaigns with Māori. Academics suggest that this type of research is a particularly fitting method but there is no existing research to demonstrate whether it can be effective with Maori public health programmes.

"Evaluation and results of the DVD documentary in the Māori community will begin in six months and will seek to confirm if the target audience found the DVD approach helpful.

"Type 2 diabetes is an increasingly significant health issue with many health professionals predicting a diabetes epidemic in New Zealand. Several studies of Maori health identify the need for new approaches to diabetes education in order to reduce the current gap between Māori and non-Māori disease rates."

Research suggests that the reported low level of diabetes knowledge in the Māori community is due to a lack of culturally appropriate media that reflects Māori beliefs and cultural practices.