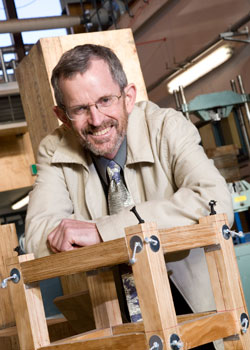 Professor Buchanan is at the international forefront of research into new methods of constructing multi-storey timber buildings.

NZIA President David Sheppard presented the award to Professor Buchanan at the NZIA awards dinner in Auckland. The President’s Award recognises a significant contribution to architecture or the built environment in New Zealand.

A citation for Professor Buchanan’s award says that in the course of his distinguished career he has undertaken work in the fields of structural, earthquake and environmental engineering, as well as fire safety, and in his current research he is drawing upon his experience in all of these disciplines to develop new timber technologies.

"But his timber design leadership is also of national importance at a time when the country is increasingly aware of the need for resilient buildings and environmentally conscious construction."

UC Pro-Vice-Chancellor (Engineering) Professor Jan Evans-Freeman says his work is particularly relevant to the future of his city.

"I am delighted to see Professor Buchanan’s innovative building design work recognised in this way. It is particularly timely also in the context of the Christchurch rebuild and the fact that some of the new structures in the city will embrace the technology developed by Andy and his team.

"Their work has resulted in a step-change in the use of timber as a structural material, allowing direct competition with concrete and steel for many multi-storey buildings. New buildings of up to 10 storeys are being built in Europe, North America and Australia, with proposals for a 30 storey timber building on the drawing board in Canada," Professor Evans-Freeman says.

Professor Buchanan received the Hideo Sugiyama Memorial Award for timber engineering from the Japan Timber Engineering Society in 2008; the Sjölin Award from the International Forum of Fire Research the same year; and the Queen's Service Medal for public services in 2002.