Scientists at the University of Canterbury (UC) are hoping that a particle that is almost nothing in size will tell them almost everything about the Universe. 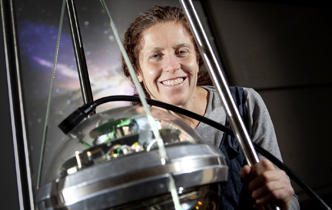 Scientists at the University of Canterbury (UC) are hoping that a particle that is almost nothing in size will tell them almost everything about the Universe.

The universe is producing high energy particles that UC scientist Dr Jenni Adams is analysing in her laboratory on campus.

"We have detected neutrinos that we think will lead us to the source of the highest energy cosmic rays. We remotely operate the IceCube telescope, an Antarctic detector, so we can track the neutrinos, or tiny particles, from here.

"The particles we are searching for are high in energy. IceCube has recently made some exciting observations,’’ she says.

IceCube is a telescope which captures images of the Universe in neutrinos rather than light. The telescope is located in the ice, between 1450 and 2450 metres below the surface at the South Pole.

Dr Adams has been part of the international IceCube project for 10 years, helping to detect the tiny particles ejected from black holes in the Universe that hurtle through the earth.

The $460 million telescope is the world's largest scientific instrument. Instead of looking upwards to light from the stars, the detector searches for tiny particles called neutrinos streaming right through the Earth until a few of them collide with ice particles under the South Pole.

The collisions produce a quick flash of blue light that can be seen for 300 metres in the clear Antarctic ice. Tracking neutrinos back to where they came from will give scientists an unparalleled insight into some of the biggest unanswered questions of the Universe, such as what happens in black holes, the violent cores of distant galaxies and the wreckage of exploded stars?

"By looking downwards, IceCube uses the earth like a filter to help identify neutrinos coming in from far away. We are hoping to work out where the neutrinos come from, so we may be able to make a map of the highest energy regions in the Universe.

"IceCube detects light emitted by charged particles that are produced when a single neutrino crashes into a proton or neutron inside an atom. The resulting nuclear reaction produces secondary particles travelling at high speeds, faster than light in the ice.

"IceCube is giving us a new way to study the mysteries of our Universe, and it is likely to uncover or lead to the discovery of things we couldn’t have anticipated.

"About 250 other physicists, computer scientists and engineers make up the IceCube collaboration, from 38 institutions in 10 countries.

"Neutrinos are important to our understanding of the kind of processes that go on in the sun and also an important building block for the blueprint of nature," Dr Adams says.