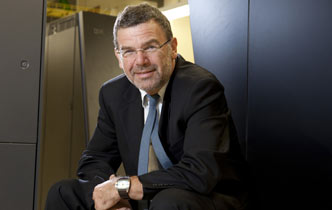 The University of Canterbury's powerful BlueGene supercomputer which is part of a national e-science project (NeSI) has been helping to solve complex nanocluster problems relating to LEDs commonly found in car and bike lights.

Nanoclusters are small groups of particles which exhibit particular properties in heating and cooling and understanding how the clusters operate at higher temperatures can help new designs of lighting products.

Professor Tim David says UC, through the national access of the National eScience Infrastructure, is using its own powerful computer, Foster, one of the biggest in the southern hemisphere. Foster has 4096 processors, roughly equivalent to 4096 small laptops. But due to Foster’s very fast links between these processors even 4096 laptops would be slower in comparison.

"A lot of this work ties in perfectly with the Government’s 10 National Science Challenges which includes science for technological innovation.

"If we want to solve really big and complex problems it’s no use any more having just pen and paper. We need a whole range of tools that help you reach the answer. A big, fast computer is one of those tools.

"There is considerable interest in the science community in nanoclusters, as they are used in transistors, solar cells and LEDs. Krista Steenbergen, a Wellington PhD student, was investigating gallium nanoclusters but realised that in order to solve the problem the local computing facilities were insufficient.

"Applying through NeSI, she was able to have access to Foster - the Blue Gene supercomputer here at UC.

"They truly wanted to help with everything I needed: implementation of my code and how best to do it on a high performance computer,’’ she says.

"Accurate modelling at this scale required the extensive use of highly parallel quantum chemistry and physics codes for performing first-principles, density-functional molecular dynamics over hundreds of thousands of time steps,’’ Steenbergen says.

As an example, one of her models required 19 parallel runs of 128 processors over 500 hours on UC’s BlueGene system, totalling more than 1,000,000  single processing hours for a single size of gallium cluster.

The UC computer was named Foster after honorary doctorate recipient Ian Foster, who effectively invented the Grid. He was considered a demi-god amongst supercomputing, Professor David says.

Professor David and his team have established an international reputation with the computer modelling of cell physiology and have collaborated with other researchers overseas.