University of Canterbury researchers are investigating energy storage devices so they can provide greater renewable energy options for New Zealand. 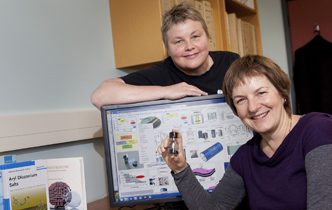 University of Canterbury researchers are investigating energy storage devices so they can provide greater renewable energy options for New Zealand.

They will lay the groundwork for future enhanced supercapacitor devices. Supercapacitors are currently used in situations where bursts of energy are required, such as hybrid vehicle braking systems and defibrillators.

"Current energy storage capabilities have to be improved to match the advance in renewable energy generation. Supercapacitors can be part of the energy storage solution.

"Compared with batteries, existing supercapacitors have low energy density, but they can be very rapidly recharged and have long charge-recharge lifetimes.

"The energy density of a super-capacitor is directly dependent on  the area of its electrodes. The key to increasing the storage capability of supercapacitors is maximising the area of electrodes.

"Graphene, a super-thin single layer of graphite, has the highest theoretical capacitance of any material and so is ideal for constructing supercapacitors.

"We have designed novel strategies for stacking carefully spaced graphene sheets upright on electrode surfaces. We can tune the spacing between sheets so we can maximise the capacitance.’’ Professor Downard says.

Their research will be carried out over the next three years and by 2017 UC will have its new $212 million Regional Science and Innovation Centre where the Chemistry Department will be based.

The Government last week announced a $260 million support for UC which included funding for the new science centre.