A group of University of Canterbury (UC) postgraduate students is investigating changes in soil carbon on intensive dairy farms. 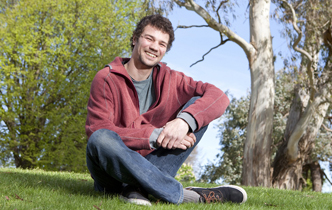 A group of University of Canterbury (UC) postgraduate students is investigating changes in soil carbon on intensive dairy farms.

Moinet says soil organic carbon is important because emissions of greenhouse gases, mostly carbon dioxide, have risen dramatically since 1970 with large consequences such as global warming and climate change. He will present his research to the annual UC biology postgraduate conference on Thursday (October 17).

"A third of greenhouse gas emissions is absorbed by the terrestrial biosphere, of which soils are the largest pool. There is a potential in the soils to take up carbon, which could partly offset atmospheric increases in carbon dioxide.

"Conversion to dairy farming has been widespread in New Zealand over the last 20 years, especially in Canterbury. Conversion involves an intensification of land management, including irrigation, addition of fertiliser (especially nitrogen) and grazing.’’

Dairy products now represent a large proportion of the country’s economy. Ninety five per cent of dairy products are shipped overseas, representing $12.1 billion in exports a year, or a quarter of all New Zealand’s export earnings.

While land management practices for dairying ensure rapid pasture growth, the long term effects on the carbon cycle and on long term pasture productivity are unknown.

Moinet’s research will measure carbon dioxide levels on a Canterbury farm that is subject to irrigation, nitrogen fertiliser and grazing.

The research is led by Landcare Research under the supervision of chief scientist Dr David Whitehead along with Professor Matthew Turnbull from UC’s School of Biological Sciences.