A University of Canterbury (UC) student has won a summer scholarship to help a project that is developing treatment aimed at improving memory in stroke patients. 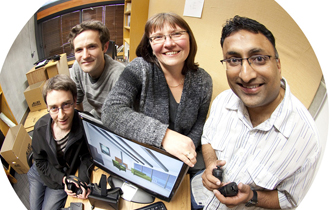 A University of Canterbury (UC) student has won a summer scholarship to help a project that is developing treatment aimed at improving memory in stroke patients.

Student Anthony Bracegirdle, under the supervision of computer science and software engineering professor Tanja Mitrovic, is working on a Marsden funded project which studies computer-based cognitive rehabilitation for patients who have suffered strokes.

"We have developed a treatment which aims to improve prospective memory in stroke patients,’’ Professor Mitrovic says.

"Our preliminary studies show that our treatment works with healthy, older people. We are now starting a study with stroke patients. One part of that study is a virtual reality environment for stroke patients to practise on their cognitive skills.’’

The UC summer scholarship project will explore alternative interaction devices. Bracegirdle will compare different devices to see which would be most helpful for stroke survivors.

The project will give Bracegirdle experience in developing computer applications for cognitive training.

"While there is a lot of research into the rehabilitation of motor functions of stroke patients there is very little research focusing on the cognitive and prospective memory side of things,” Professor Mitrovic says.

"We have developed a 3D virtual reality environment in which the stroke patients are asked to perform various actions similar to those in real-life, such as making a cup of coffee or a sandwich.

"The Government is interested in getting patients out of full-time care and into jobs, or at least to have more autonomy in their lives. We hope our work will make a real difference for those people recovering from a stroke.”

People who suffer strokes usually undergo substantial rehabilitation in the hope of restoring their memory to where it was. Currently, there is not a rehabilitation process to restore people’s memory, only their physical movement.

Stroke is the third largest killer disease in New Zealand. The issue is becoming more important in an ageing population. The UC team hopes its research will make a difference helping patients move out of 24-hour care and gain a better quality of life.

About 9000 New Zealanders suffer strokes annually and around 10 percent of stroke deaths occur in people under 65. Stroke is the major cause of serious adult disability in New Zealand. There are an estimated 60,000 stroke survivors in New Zealand. Many are disabled and need significant daily support.

About 150 UC students are undertaking scholarship research projects this summer. On top of that, at least 880 students have enrolled in more than 80 summer courses. Around 600 tradesmen will be on campus over the summer as the University’s building remediation programme ramps up.