A University of Canterbury researcher is investigating the role and impact of art works on the changing inner streets of post-quake Christchurch. 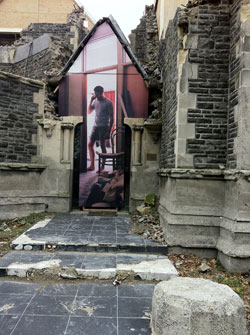 An example of ever changing post-quake Christchurch street art.

A University of Canterbury researcher is investigating the role and impact of art works on the changing inner streets of post-quake Christchurch.

A substantial number of commissioned and illegitimate murals and art works have appeared as part of the city's recovery following the loss of historic buildings.

"This could be a period of time where Christchurch becomes a city with a widespread reputation for creative impulses," UC art history researcher Reuben Woods says.

"It is interesting to consider how art in public spaces can become a symbol as the city is rebuilt and empty spaces are filled.

"As an undergraduate student in the mid-2000s, there was little chance to write about urban art. In September 2011, I visited a number of cities that have strongly developed street cultures such as New York, London, Paris, Berlin, San Francisco and New Orleans.

"As I wandered the streets of these cities, I began to imagine the potential for the empty lots, bare walls and remaining buildings of Christchurch.

"Within the arts community there is a desire to find traditional working and exhibition spaces but there are also a number of groups and individuals transforming the damaged spaces of the city in a variety of ways, from the projects of Gap Filler to the work of anonymous street artists.

"These projects are adding life to the streets of Christchurch, from the spaces where people dared not tread to the unavoidable spaces that constantly remind people of the city’s experiences," Woods says.

He has spent a significant amount of time walking Christchurch’s streets, alleyways and ever-changing spaces. The artists in many cases are anonymous and difficult to track down, if they want to be found at all.

"This research has an important role in documenting a specific aspect of a vibrant and exciting time in the history of Christchurch. Many of the works I have been able to record have now disappeared but they have nonetheless been an important part of the artistic response to Christchurch's recovery and rejuvenation, as well as the continuing journey facing the city.

"In the past, Christchurch has not had a reputation as a city with a thriving street art scene but the city's post-quake transitional landscape has presented the chance for a generation of artists and creative types to reconsider the streets as a site of visual discourse concerning recovery and the challenges facing the city and its citizens.

"This could be a period of time where Christchurch becomes a city with a widespread reputation for creative impulses. Of course, as with all urban art, as the city is rebuilt transitional urban art may also provide a focal point for the questions around public space and the power relations at play," Woods says.

His research, supervised by Dr Emilie Sitzia, Dr Barbara Garrie and Dr Ian Lochhead, will be completed at the end of the year.