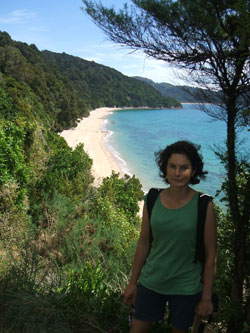 UC’s Dr Deirdre Hart says in the aftermath of significant earthquakes, coastal risk assessments need to be revisited. This need occurs at the same time as planners are pressured into making swift decisions about the recovery of damaged areas.

A team of UC geographers and engineers have been crossing traditional boundaries to gather evidence from coastal cities including Christchurch, Dunedin, Wellington, Napier and Auckland, as well as Tohoku in Japan, Port-au-Prince in Haiti, Lisban in Portugal and Charleston in the USA.

"It is a big concern internationally given that coastal populations are growing at twice the rate of the total population worldwide so that over 50 per cent of humanity is forecast to live in coastal settlements by 2050," Dr Hart says.

Evidence indicates that, in reality, capacity to incorporate into recovery plans the lessons that could make coastal cities more disaster resilient is limited if the hazard links are not understood before a quake occurs.

"For places like Dunedin, Christchurch, Wellington and Tohuku it’s not hard to find the links. This means identifying the liquefaction, rockfall, cliff collapse, sewerage, water and transport system risks associated with coastal plains and thinking about what regional forecasts of sea level rise, coastal erosion and pollution rates mean in a tectonic setting.

"This provides us with a great opportunity to avoid or mitigate future development-disaster cycles for quake-prone coastal cities by becoming aware of these links so we can minimise their effects and build resilience into everyday planning. We now know much more about how to construct multi-hazard recovery methods before disasters occur."

She will deliver a paper on coastal hazards at a public conference on campus on tomorrow.