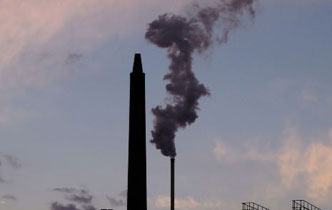 "You can see this in the credit trading traffic recorded by our credit registry.  No other country with a carbon trading scheme behaves in this way.  They recognise that some credits are doing nothing for the environment and they restrict them.

"We give our agricultural sector a free ride, even though agriculture contributes roughly half our total emissions. The whole idea of being greenhouse gas neutral by purchasing credits in a cap and trade scheme is irrational,’’ Professor Mason said.

"Under our scheme when a firm falls below its allocation of free units, it can use the remaining units to offset its remaining emissions and claim that its operations were greenhouse gas neutral, when in fact it has only reduced emissions to the level of the cap. Not all credits are created equal, but they are treated equally in our scheme.

"We have failed to change in substantial ways because our ETS provides no incentive. We have failed to plan for the future, and during the 2020s our emissions are going to rise hugely when the forests planted in the 1990s are harvested.  We have withdrawn from the Kyoto Protocol rather than take responsibility for this failure.

"We have progressively weakened our ETS so that New Zealand has not changed much in the face of climate change and now, when it is clear that the consequences of our failure are approaching, we have withdrawn from Kyoto.  We also allow unrestricted imports of credits.

"Other countries and people are changing their behaviour.  In Sweden, for instance, one sees wind generators everywhere and Sweden now generates more than 50 percent of its energy from renewables versus 35 percent in New Zealand, even though Sweden has limited capacity for hydro compared to New Zealand.

Professor Mason said large segments of the New Zealand community were in denial. Many people in the farming sector believe that anthropogenic climate change is not real and some say it is a hoax. The rest of the world is actually trying to solve the problem.

New Zealand could easily be greenhouse gas neutral by planting 2.5 million hectares of eroding land in trees with hardly any destocking of livestock, Professor Mason said.

"This would make New Zealand the first OECD country to be fully greenhouse gas neutral for between 60 to 100 years. That would help us back up our 100% pure slogan.’’