University of Canterbury history honours students Kimberley Hayes and Ngaio Hughey-Cockerell have been exploring and discovering the changing graduation traditions of UC. 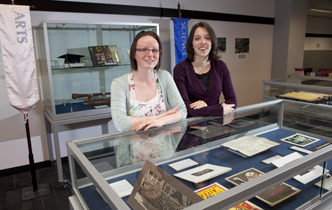 The exhibition, titled Time of Mirth and Play: The Changing Graduation Traditions of UC, uses items from the Macmllian Brown Library collections to explore how graduation has changed at UC from the late 19th century to today.

Kimberley and Ngaio discovered that past aspects of graduation included events which demonstrated that the involvement of students was of great importance which was reflected in the kinds of events that often accompanied the official graduation ceremony.

“The great emphasis on the songs sung during the graduation ceremonies in the early days was interesting, and this seemed such an important aspect for the students, “said Ngaio.

There has been a radical shift and a change in the nature of graduation since the 1890s, which has been reflected in the duo’s work.

“The 1970s was an interesting time period for both of us to research because of the student publication Canta, the photographs and the type of events which occurred at this time greatly reflected 1970s society,” said Ngaio.

The students have been supervised in the Macmillan Brown Library by Erin Kimber, University Library Archivist,  who was thrilled with the dedication and passion that Ngaio and Kimberley displayed.

“They learnt research, handling, communication and curatorial skills which are essential when seeking employment in the public history, library and museum sector. It’s fantastic that we can offer students at UC an experience like this, and with a wealth of untapped resources in the UC archives, I look forward to working on future projects with such a positive outcome.” said Kimber.

Kimberley and Ngaio’s honours work is being supervised by Associate Professor Lyndon Fraser (Social and Political Sciences). He says that the duo have done a fantastic job with their exhibition, worked hard and really grown.

“It has been a terrific learning experience. They have worked together as a team and wrestled with the challenges of ‘doing the past’ in a hands-on or applied way. They had to consider so many elements, including audience, the visual and the joys of writing labels,” Professor Fraser said.