Do catches win matches? Not in one-day games

It is a famous cliche in cricket that catches win matches. But in one day international cricket at least, fielding is much less important than batting or bowling. 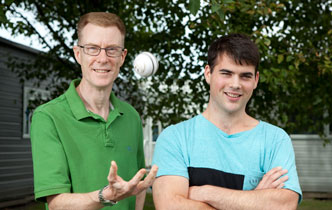 It is a famous cliche in cricket that catches win matches. But in one day international cricket at least, fielding is much less important than batting or bowling, University of Canterbury research has found.

It is hard to assess the role of fielding rigorously, as traditional cricket scoring has a large number of statistical indices for batters and bowlers but very few for fielding.

A research project at UC this summer has sought to address this, for the case of one day international (ODI) cricket. The research was undertaken by incoming honours student Marcus Downs and supervised by economics and finance lecturer Dr Seamus Hogan.

The research looked at 122 ODI games played between the top eight cricketing nations between February 2011 and July 2012, including the 2011 Cricket World Cup.

The research involved classifying all the opportunities for a  fielding dismissal - catch, run out or stumping - with a degree of difficulty based on the ball-by-ball commentary on the cricinfo website. The researchers then analysed the contribution those opportunities could have made to the overall performance of the team.

"While obviously a brilliant catch or run-out can sometimes turn a match, we found that, in ODI cricket at least, fielding was not as vital as batting or bowling. Specifically, according to our data, good bowling can contribute about three times as much as good fielding to the performance of the team, and good batting even more,’’ Dr Hogan said today.

"Over the period of our database, New Zealand ranked first out of all the major cricketing nations in taking catches and effecting run outs, once the degree of difficulty of the catch or run out was taken into account. Despite this, however, over the same period, the Black Caps had the worst record in ODI cricket of all the major cricketing nations.

The results of the cricketing summer scholarship will be presented at a public event on campus on February 8.