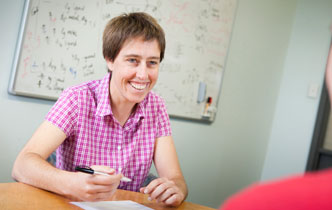 Dr Deborah Crittenden has received $300,000 of Marsden funding to elucidate the fundamental principles of biological photosynthesis with a view to designing simpler chemical systems that work on the same principles.

She hopes that this could one day result in households having low-cost, high-efficiency and carbon-neutral solar energy capture, conversion and storage systems on their roofs.

Photosynthesis is the main way of converting light energy from the sun into electrical energy. Its main advantage over other electrical energy generation technologies such as solar panels, wind and geothermal, is that the electrical energy is further converted into chemical energy that can be stored for long periods of time until needed, Dr Crittenden says.

"Depending on how you look at it, photosynthesis is either remarkably efficient, converting almost 100 percent of photons from the sun into electrical current, or remarkably inefficient, only finally storing 3 percent of the total energy arriving on a leaf's surface, with a lot of energy going into making biochemical by-products and heat.

"Our aim is to beat photosynthesis at its own game, designing simpler chemical systems that extract as much energy as possible from arriving photons to prevent this energy being lost as heat, retain the same 100 percent photon to free electron conversion rate and convert the electrical energy into chemical energy without wasting energy on biochemical by-products.

"To achieve this, we must first understand how the arrangement of atoms within the photosynthetic reaction centre leads to its ability to absorb light energy and liberate electrons to produce electrical current.

"At the moment, there aren't many good computational quantum chemical methods available for modelling the behaviour of electrons before and after absorption of light, and none that can be applied to systems as large as the photosynthetic reaction centre.

"The key innovation at the heart of this research project is developing a new mathematical and computational framework that will allow us to establish the link between molecular structure, photon absorption, electrical current production and the process of storing electrical energy by rearranging chemical bonds.

"The next step will be using this method to work out how to modify the arrangement of atoms to maximise the energy capture, conversion and storage efficiencies.

"This fundamental understanding will underpin the development of new low-cost, high-efficiency and energy storage technologies, which will be of significant environmental and economic importance, as the impact of increasing carbon dioxide emissions and the need to find alternative carbon neutral energy sources becomes ever more pressing.

"Meeting the world’s ever-increasing energy needs without increasing carbon dioxide emissions is one of the most pressing scientific and technological challenges of the modern age. Tapping solar energy is a potential solution, but robust, cost-effective solar technology has not yet been realised,’’ Dr Crittenden says.