Crimes from Christchurch's colonial past revealed

A mysterious severed hand, a slander case involving a prominent merchant, bigamy, fraud and murder all feature in Christchurch Crimes and Scandals 1876-99. 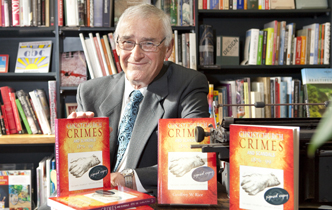 A mysterious severed hand, a slander case involving a prominent merchant, bigamy, fraud and murder all feature in Christchurch Crimes and Scandals 1876-99, the latest offering from historian and UC alumnus Professor Geoffrey Rice.

Following on from Professor Rice’s previous book, Christchurch Crimes 1850-1875: Scandal and Skulduggery in Port and Town (CUP, 2012), this fascinating collection of tales of crime and scandal focuses on the late Victorian period of Christchurch’s history and offers readers an insight into a colourful and intriguing chapter in the city’s past.

“It is a collection of compelling ‘true life’ narratives, full of human interest and drama, with humour and pathos nicely balanced,” Professor Rice said.

The book draws on 19th century newspaper reports that cover the activities of a procession of lawbreakers that passed through the city’s courts – from apologetic drunks, shifty forgers, arsonists and brutal thugs, to women charged with infanticide and men charged with murder or manslaughter.

“The book is possibly a reminder of the awful consequences of criminal behaviour. Another theme that is highlighted throughout is the role of alcohol. Many of these poor criminals claimed they broke the law only because they were drunk at the time,” Professor Rice said.

Professor Rice was formerly professor of history at University of Canterbury, where his main fields of academic research included 18th century British foreign policy and the social history of medicine in New Zealand. His account of the 1918

influenza epidemic, Black November (CUP, 2005), was shortlisted for a Montana New Zealand Book award in 2006. His other books include Christchurch Changing (CUP, 1999), Lyttelton: Port and Town (CUP, 2004) and All Fall Down: Christchurch’s