Costs of earthquakes depend on response

The long-term social and economic costs of earthquakes are highly dependent on how the built environment responds to the event. 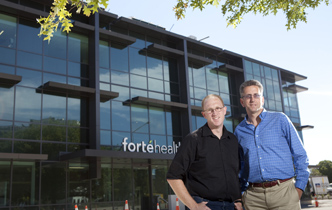 The long-term social and economic costs of earthquakes are highly dependent on how the built environment responds to the event.

Modern building codes demand that critical infrastructure, such as hospitals, power stations and key lifeline bridges must be available post-earthquake to ensure optimal response and minimal disruption. Equally, the ability of businesses to return to regular operation is vital for a functioning economy.

Low-damage structures are an emerging area of research and development that offer an effective solution to this challenging problem, University of Canterbury (UC) mechanical engineer Dr Geoff Rodgers says.

"Low-damage structural concepts have, at their heart, a range of novel energy dissipation devices. These devices are used to dissipate energy and mitigate response to shaking in place of traditional design approaches that rely on structural yielding and damage to dissipate energy, but at the cost of downtime, repair or demolition.

"At UC we have developed high force to volume energy dissipation devices, 96 of which have been developed and used in the new $40 million Kilmore St Medical Centre - one of the first new, major structures to rise in downtown Christchurch following the 2010 and 2011 earthquakes. The Kilmore St facility is an innovative, low-damage seismic-resistant design.

"The Kilmore Centre uses a post-tensioned rocking steel system to allow controlled motion in an earthquake. It incorporates 96 high force-to-volume devices as a frontline energy dissipation and damage avoidance system.

"The devices plastically extrude to absorb energy and reduce response – much like making Play-Doh spaghetti or squeezing toothpaste out of a tube – and dissipate large amounts of energy to reduce motion in a damage-free manner.

"These devices have been extensively tested at UC with funding from the Natural Hazards Research Platform.

"It will be immensely gratifying to now see these devices complete their journey from bench to building in their first use in protecting communities.’’

The device project is the result of an eight-year collaboration led by Dr Rodgers, Professor Geoff Chase and Associate Professor Greg MacRae at UC, as well as postgraduate students.

The devices will enable the creation of more resilient cities and communities that are far more resistant to the physical and economic damage that results from large earthquakes, and are contributing to the emergence of a new, more resilient downtown Christchurch.