UC's Professor Simon Kingham will tell the Asia Pacific cycling conference that ChCh has one of the best opportunities in the world to embrace cycling in its rebuild. 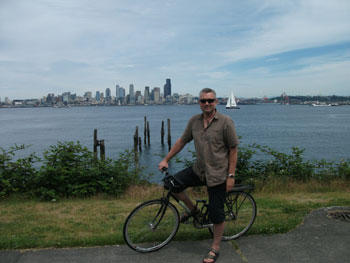 University of Canterbury’s transport professor Simon Kingham (Geography) will tell the Asia Pacific cycling conference on the Gold Coast next week that Christchurch has one of the best opportunities in the world to embrace cycling in its rebuild.

The role of the bicycle as a form of transport in a rebuilt Christchurch should be significant, Professor Kingham says.

He says international experience showed more people would bike to and from work to significantly help reduce the country’s petrol consumption if an integrated cycle network was approved.

"Many cycle planners from around the world often say build a separate cycle way and cyclists will support it. Cycling is so good and has so many benefits. It relieves congestion, reduces obesity, helps climate change and we should do all that we can to encourage more people to cycle."

In 2010, 10 cyclists died, 149 were seriously injured and 695 suffered minor injuries in police-reported crashes on New Zealand roads. Earlier this year a coroner asked if cyclists should legally have to use cycle lanes where they are provided.

"Safety is the main issue and we need to separate bicycles from the motoring traffic, so it is great that the Christchurch City Council has committed $70 million to a cycle way.

"Increasingly, countries and cities around the world are realising the importance of investing in cycling. In New Zealand some good cycling initiatives have been developed in Hastings and New Plymouth. Christchurch has huge potential."