The development of race relations and biculturalism in New Zealand is explored in a new biography published by Canterbury University Press this month. 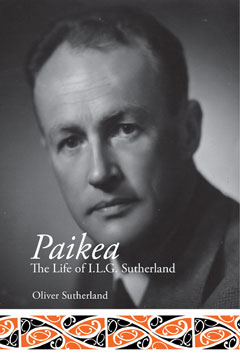 The development of race relations and biculturalism in New Zealand is explored in a new biography published by Canterbury University Press this month.

Paikea: The Life of ILG Sutherland explores the life of scholar, cultural anthropologist and social activist Ivan Sutherland (1897-1952), who was committed to a bicultural New Zealand and worked tirelessly to promote understanding of Māori aspirations in the first half of the 20th century.

The book’s author, Oliver Sutherland, is Sutherland’s son and said his father was “an enthusiastic advocate for Māori self-determination”.

“He became a close friend of the great Māori leader and politician Sir Apirana Ngata and, at the time of Ngata’s resignation from Cabinet in 1934, he wrote a book called The Māori Situation. It was the first time anyone had spelt out what race relations had been and what they could be in New Zealand. I believe the book helped lay the groundwork for New Zealand becoming a bicultural society.”

Sutherland went on to edit The Māori People Today (1940), which was a comprehensive survey of the Māori situation 100 years after the signing of the Treaty of Waitangi.

“Through his work, Ivan was advocating for a more harmonious relationship between Māori and Pakeha. He was a humanist with a strong social commitment,” said Oliver.

Sutherland’s relationship with Ngata drew him into the world of Ngati Porou. As a sign of respect for him, Ngati Porou gave him the name of one of their legendary ancestors, Paikea.

Sutherland was also involved in a number of progressive community initiatives. The book details his involvement in the debate over New Zealand's eugenics movement, the development of publicly owned broadcasting in New Zealand and the entry of Jewish refugees to New Zealand prior to and during the Second World War.

It also details the sometimes difficult relationship Sutherland had with philosopher Dr Karl Popper, with whom Sutherland worked with while professor of philosophy at the then Canterbury University College.

“My father died when I was eight-years old so I didn’t really know him at all but by writing this book I discovered he was a compassionate man, a humanist with a strong social commitment. Even though he died unexpectedly early, his story is a very positive one.”

Paikea: The Life of ILG Sutherland will be launched on 8 October by broadcaster Whai Ngata at Tairāwhiti-Hinepare Marae, Rangitukia, in conjunction with the 2013 Sir Apirana Ngata Memorial Lectures.

A second launch by Professor Tim Beaglehole will be held on 10 October at Unity Books in Wellington.

You can listen to Oliver Sutherland being interviewed by Chris Laidlaw on Radio New Zealand here.

About the author:
Oliver Sutherland, a retired scientist, studied at the University of Canterbury, Cambridge University and the University of California (Berkeley). He joined the DSIR in 1969 and remained with the department and then Manaaki Whenua Landcare Research until 2003. In 1970 he joined the Nelson Maori Committee, helped establish the Nelson Race Relations Action Group and, in 1973, the Auckland Committee on Racism and Discrimination. He led an attack on the mono-culturalism of the science sector in the mid-1980s and helped conceive and frame the Native Flora and Fauna Claim to the Waitangi Tribunal.