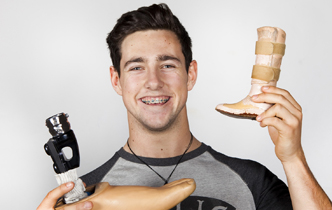 With just his first weekend in training behind him, University of Canterbury (UC) blade-running student Liam Malone is already fine tuning and focusing on qualifying for the Paralympic Games in Rio de Janeiro in September 2016.

The 19-year-old UC commerce student, who lost both legs at the age of two, has been trialing his first ever pair of running-blades in a bid to become New Zealand's most successful sprinter at the next Paralympics.

"My goal is to reach Rio. That is my focus. To define what it would take to win the gold at this stage is difficult. It is definitely possible but I need to focus on building my platform to develop day by day. That's how I work.

"But I believe it's realistic for me to be the best and I have the potential to be the best. But realism and potential don't win medals. Hard work does and that's what I have to do before I go anywhere.

"A lot of work will need to be done to qualify for Rio. There are the world champs in 2015, and, to qualify, I need to gain sufficient world rankings by competing in certain events. A huge amount of focus will go into getting out of the blocks as fast as fast as possible, as a bilateral amputee sprinter that's where my time will be lost or gained.

"Developing strength and power in my hamstrings, quads and glutes to be able to put as much energy into the blades, so in return I get the maximum amount of drive out of each step.

"The quality of technology among para-athletes is so even it will come down to the minor elements on the day and a lot of mental focus.’’

Malone is working this week on his prosthesis, making adjustments to the sockets which fit to the blades. He is the only known bilateral amputee sprinter in the country. See Malone on his first day of training on UC's YouTube site and an interview with Malone.

The Wellington athletics championship in March will be his first competitive event on the blades. He will compete in the sprints and relay against able-bodied athletes as much as he can.

Malone says he has been overwhelmed by support from UC Sport run by Grant Robertson.

"Grant has developed a programme to begin developing my strength, power and speed. I've also attended UC sports psychology seminars. They have set up slow motion cameras to help with the analysis of aligning the blades to the sockets.

"UC has been fantastic. What is special about UC is the communal identity that everyone's so connected. This is a great place to study. The abundance of societies is truly awesome. The library is a pretty cool place too. The first time I went to the library I was overwhelmed by the sheer size of it.

"Rochester and Rutherford Hall has been incredible. I've made friends there who will remain friends forever. Being part of the rebuild of Christchurch to its former glory has been awesome.’’