Window on early life on Earth

Unique microbial structures found only in a remote lake in Antarctica are giving a University of Canterbury researcher a glimpse into the organisation of early life on Earth. 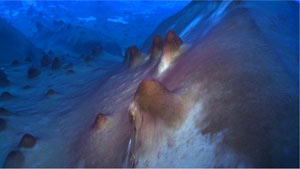 Some of the unique microbial structures Professor Hawes has been studying in Lake Untersee, Antarctica.

Unique microbial structures found only in a remote lake in Antarctica are giving a University of Canterbury researcher a glimpse into the organisation of early life on Earth.

Limnologist Dr Ian Hawes, Professor of Antarctic Limnology at Gateway Antarctica and the Waterways Centre for Freshwater Management, was recently part of an international research expedition to study other-worldly landscapes discovered in 2008 in Lake Untersee in the Queen Maud Land area of Antarctica.

Lake Untersee, the largest and deepest freshwater lake in East Antarctica, was extremely unusual, Professor Hawes said. Its crystal clear waters were permanently covered in about three metres of ice so there was no contact with the atmosphere; there were no streams flowing into the lake so it got all its water and gasses, including carbon dioxide needed for photosynthesis, from melting ice. The lake’s water, which contained high levels of dissolved methane, was extremely alkaline.

These unusual features, Professor Hawes said, had led to the creation of a unique environment as microbial ecosystems in the lake adapted to their unusual surroundings over millions of years.

Working with scientists from the Winogradsky Institute of Microbiology, part of the Russian Academy of Sciences, and planetary scientists from NASA, the SETI Institute and the University of California, Professor Hawes’ role on the expedition was to study bacterial cone-like structures, a form of stromatolite, that cover the bottom of the lake.

“These structures rise up to half a metre from the lake bottom, are covered in a thin layer of intensely purple Cyanobacteria (blue-green algae) and are made up of layer upon layer of organo-sedimentary material. These structures seem to be unique in the modern world yet closely mirror formations that were common in shallow waters around the globe around two billion years ago,” he said.

“Understanding the functioning of these modern structures can offer insights into how the earliest communities on Earth were organised. Cyanobacteria are the oldest lineage of photosynthetic organisms on Earth, having evolved two to three billion years ago when the Earth was a very different place. It is they that are thought to have introduced high concentrations of oxygen into the atmosphere and, for hundreds of millions of years in the Precambrian era, they probably dominated the planet.

“The first evidence of the emergence of these organisms are fossils known as stromatolites, to which some of the Lake Untersee structures bear a striking resemblance. The Untersee structures in particular resemble a type of stromatolite known as a ‘complex cone’, and these are so far the only known modern example of such stromatolites. There is still controversy over the extent to which this and related kinds of stromatolite are evidence of biology or could be formed by sedimentation alone.  The evidence from Lake Untersee comes down on the side of a biological involvement.”

He said the astrobiologists were particularly interested in what the lake could tell them about what life could have been like on Mars.

“Mars is extremely cold now but it used to be a lot warmer and there is a body of opinion that, for a long time, it could have supported Earth-like organisms. Knowing what to look for as incontrovertible evidence of past life is a real challenge, and the communities in Lake Untersee provide more insights into what fossilisable structures are unmistakable evidence of life.”

Professor Hawes first got a glimpse of Lake Untersee and its unusual inhabitants in 2008 when he travelled to Antarctica with the same group of researchers. Unable then to study the lake fully, the team was able to return recently to study its environment more closely.

“We were a varied team and my job was to measure the photosynthetic activity of the bacteria and to look at the ecology of the lake and how the mounds were formed. In terms of growth, the structures formed very slowly — growing at a fraction of a millimetre a year over thousands of years. Slow growth is mainly due to the absence of carbon dioxide in the water, which severely limits photosynthesis but the very small amount of sediment reaching the lake means that even slow growth can outpace sedimentation.”

He said the cone-like shape of the structures was also due to the convection currents caused by the melting ice, which also distributed the bacteria, creating chains of mounds along the lake floor.

“Diving beneath the ice of Lake Untersee is an eerie experience. Everything is blue, its super-quiet, the water is crystal clear and spread out before you, and way into the distance are countless numbers of these extraordinary cones. It’s easy to imagine that you have dived into a different world.”

Professor Hawes said the task now was to examine samples collected from the lake as there were a lot more questions the team wanted to answer.

“As far as we know there are no other ecosystems like this in the world and by studying it we could have a better understanding of what life perhaps used to be like on Earth billions of years ago.”