Union history in the spotlight 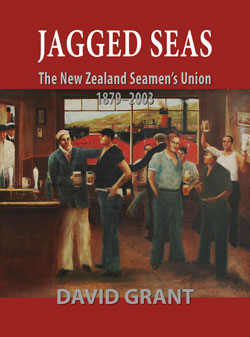 Jagged Seas: The New Zealand Seamen’s Union 1879-2003, written by labour historian David Grant, examines the history of the union and the part it played in shaping New Zealand’s political and industrial landscapes.

Established in 1879, the aim of the union was to protect the rights and interests of its members through better pay and conditions. It played a central role in some of the biggest industrial disputes in New Zealand’s history – in the Great Strike of 1890, the general strike of 1913 and the 1951 Waterfront Lockout – and participated in political struggles such as against the Vietnam War, nuclear ship visits and apartheid in South Africa.

In Jagged Seas, Mr Grant looks at the changes that have occurred in the working lives of seamen and in union practice over its 124-year history. He portrays an organisation that was assertive and volatile but always dedicated to the struggle to win jobs for its members and to better their lives.

In 2003 the union merged with the Waterside Workers’ Union to form the Maritime Union of New Zealand, which continues to play an important role in New Zealand’s industrial relations environment, most recently in its dispute with the Ports of Auckland.

Mr Grant became a professional historian in 1990 after successful careers in newspaper journalism and teaching. Jagged Seas is his twelfth book, his fourth on labour history. He is currently researching a biography of former New Zealand prime minister Norman Kirk. He was a founder executive member of the Professional Historians' Association of New Zealand and was long-term chairperson, and is a life member of the Labour History Project.