Sex or making love and drinking alcohol or partying are two of the most enjoyable activities, according to a University of Canterbury research project. 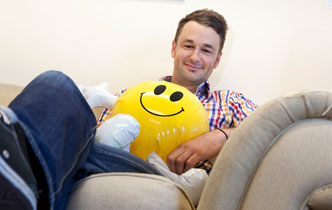 Sex or making love and drinking alcohol or partying are two of the most enjoyable activities, according to a University of Canterbury research project.

Washing, dressing and grooming ranked last in terms of engagement while feeling sick was lowest rated in terms of happiness and pleasure.

Surprisingly Facebook rated last in meaning while texting came in 26th in happiness. Carsten's research has revealed the complex relationship between happiness and well-being in people’s daily lives.

The recent boom in happiness research has seen everyone from academics to governments become interested in ways to measure and track happiness, Carsten said.

Well-being was finding its way into policy decision-making alongside traditional economic indicators like GDP. But how good was society’s understanding of what made for a good life and how to increase well-being? Carsten will present his research on November 14 as part of the UC’s showcase lecture series.

"Treasury is now including well-being measures - life satisfaction - in its higher living standards framework, so governments are into this well-being stuff.

"I am currently researching how to add to that understanding. So far governments around the world and media have focused mainly on life satisfaction in the discussion about well-being; it turns out happiness is a far more complicated topic.

"One of the areas I’m researching - orientations to happiness – looks at whether there are different ways of going about seeking happiness. Psychologists have proposed that individuals may seek to increase their well-being through three main behavioural orientations; via pleasure, via engagement, and via meaning.

"Endorsing pleasure as a way to happiness means you enjoy `eating dessert first’ or you focus on feeling good and enjoying sensory pleasures. Engagement is what you experience when you’re totally absorbed in what you’re doing; either skiing down a hill or being immersed in your work. People call this experience a state of `flow’ and this may be a dominant orientation to happiness for some people.’’

Having meaning in a person’s life was a way to pursue happiness; being part of something bigger and contributing to the greater good.

Carsten used mobile-phone text-messaging to collect data on what people did during the day and how they felt about it, a technique called “experience sampling”.

Using mobile-phones to sample what people do provided information on well-being in people's everyday lives which was richer than traditional surveys.

"I texted people three times a day over a week and the response rate was really high. People are never far from their cellphones these days. People replied to on average 97 percent of all text-messages, and texts were sent at random times, so there is a really rich sample of everyday life to look at.

"From my research I can see what activities are routinely rated as highest and lowest in people's daily lives. Having sex is (no surprise) highest on all measures of happiness. Being sick is again, no surprise, relatively low on all  measures. Going to lectures, or studying, is low on pleasure and happiness, but ranks relatively high on meaning (7th out of 30 behaviour categories).

"The results have implications for what psychologists have called `the full life’. Those who tend to be high on all three orientations to happiness not only score high on life satisfaction, they also tend to have higher experiences of pleasure, meaning, engagement and happiness in their daily lives.

"This means that being able to seek happiness in different ways may enrich your everyday experience and increase your overall well-being.

"This is a fascinating area of study and one I am really excited to be a part of. Hopefully as we learn more about what contributes to a full life we can help people increase their happiness in their daily lives. It’s been cool to study at UC for sure.’’

Carsten's research at UC has been supervised by Professor Simon Kemp.

Note. Behaviours ranked from highest to lowest on happiness. There were 30 behaviour categories in all; the highest and lowest 10 behaviours on happiness are shown.