New Zealand has become the first country to catalogue its entire living and fossil biodiversity and, with the release of the latest book from Canterbury University Press, that full inventory is now available in print. 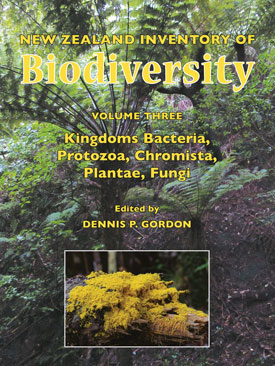 New Zealand has become the first country to catalogue its entire living and fossil biodiversity and, with the release of the latest book from Canterbury University Press, that full inventory is now available in print.

New Zealand Inventory of Biodiversity (Volume 3), edited by NIWA biodiversity scientist Dr Dennis Gordon, is the culmination of an international effort he led involving 237 other New Zealand and overseas authors.

It is the final book in a comprehensive three-volume inventory that offers the first full review of New Zealand’s entire known species of animals, plants, fungi and micro-organisms – some 56,000-plus living and 14,000-plus fossil species – covering all life in all environments, from the Cambrian to the present day. The latter includes both native and naturalised alien species.

The three volumes are associated with Species 2000, an international scientific project which aims to record all named species on Earth in one online list called the Catalogue of Life.

“I didn’t anticipate that this project would take so long, but it should not be surprising that a 1758-page review and inventory of ‘all of life through all of time’ in New Zealand, involving specialists in 19 countries, has taken a decade to come to completion,” said Dr Gordon.

“The project was launched in February 2000 at the Species 2000: New Zealand millennial symposium in Wellington and the papers that were presented formed the basis of the fuller accounts given in the trilogy of volumes now published. But experts had not yet been found for some groups of organisms in 2000 and the challenge of filling the remaining gaps persisted through the decade. In the end all the gaps were filled, some as recently as in the last six months of the project, making this biodiversity inventory the most complete for any country. It will have many applications.”

Volume 1 (2009) and Volume 2 (2010) covered the animal kingdom, while Volume 3 deals with the remaining groups of life – bacteria, protozoans, algae, plants and fungi.

Volume 1 catalogues the branches of the animal kingdom that include living and fossil sponges and corals, worms and shellfish and their relatives, and vertebrates – the fishes, amphibians, reptiles, birds and mammals. Volume 2 mostly deals with the major branch of the animal kingdom known as Ecdysozoa (moulting animals), which includes arachnids, centipedes and millipedes, crustaceans, insects and related marine worms.

To mark the release of the final volume, Canterbury University Press is releasing the three books as a boxed set presented in a specially designed slipcase.

Dr Gordon is a Principal Scientist at the National Institute of Water and Atmospheric Research in Wellington and is one of New Zealand’s leading biodiversity scientists. In 2005 he was the recipient of the New Zealand Marine Sciences Society lifetime achievement award and is engaged in biodiversity activities both nationally and internationally, including serving on the international teams co-ordinating the production of the Catalogue of Life and the World Register of Marine Species.

New Zealand Inventory of Biodiversity (Volume 3) will be launched at Te Papa, Wellington, on 21 May.