Research aims to reduce side effects of cancer treatment

The painful side effects of cancer treatment, including nausea and hair loss, could be a thing of the past with ground-breaking chemical research being conducted at the University of Canterbury. 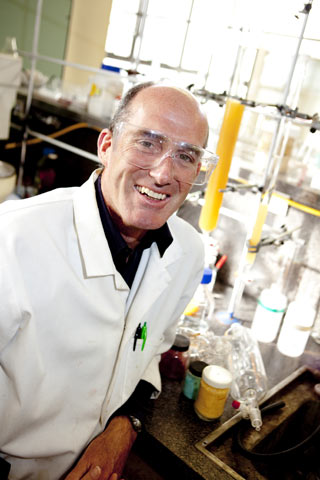 Associate Professor Richard Hartshorn hopes his research can reduce the nasty side effects of cancer treatment.

The painful side effects of cancer treatment, including nausea and hair loss, could be a thing of the past with ground-breaking chemical research being conducted at the University of Canterbury.

“We have come up with an idea for how we can trigger the release of anti-cancer drugs. Essentially we are trying to create a large molecule where you can shine light through a fibre optic cable which is absorbed at one end and causes a chain reaction through the system to release drugs at the other end that will kill cancer cells,” he says.

“There are lots of possible benefits from this because a lot of the nasty side effects of chemotherapy come from drugs that target all the cells in the body that divide rapidly because that’s how cancer cells react. But there are other cells in the body that divide rapidly but may not be cancerous, such as cells in the lining of the gut and cells that create hair – hence why many people suffer nausea and hair loss during cancer treatments. If you only activate the drug in the site you want to target the cells then presumably you should see fewer side effects.”

“We envisage it could be used for situations when a tumour is not operable because it’s too close to something vital. We have evidence that indicates releasing toxins in this way will work more effectively inside a tumour than outside on normal tissue. The reason for that is inside a tumour there is not much blood flow so the cells have less oxygen and under those conditions this process would work in a more effective way,” he says.

Professor Hartshorn, who has been working on the concept since it was mooted while working at the University of Melbourne 15 years ago, says his idea using a chemical process with ruthenium is unique.

“We have already successfully made complexes that have both ruthenium ion working as an antenna to absorb the light and a cobalt ion at the other end that attaches onto the cancer drugs before it is released,” he says.

“There are quite a lot of cancer drugs we could attach to the cobalt and the idea would be to use already approved drugs.”

Although it’s still at the early stages of development and research, a prototype molecule has already been sent to the University of Sydney for analyses of how it reacts and behaves inside a cell.

“We don’t know the answers yet so this is very much a work in progress. This could have a future not only when a cancer is inoperable but also as a combination treatment to deliver drugs in a more direct way. It’s a possibility that we need to work through in case it could be useful.”