A rare German bible, a fifteenth-century genealogical roll and papers from a World War Two war crimes trial are among the unique and seldom-seen items set to be showcased in the latest book from Canterbury University Press. 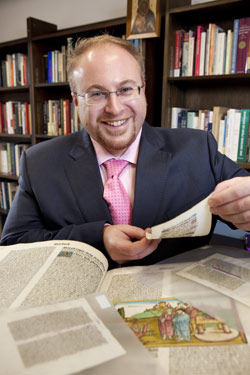 A rare German bible, a fifteenth-century genealogical roll and papers from a World War Two war crimes trial are among the unique and seldom-seen items set to be showcased in the latest book from Canterbury University Press.

Dr Jones, who is also Senior Lecturer in Medieval History at the University, said the aim of the book was to raise awareness of the unique items held by the UC Library and “to develop a broader understanding of the collection by taking an holistic view of how it had come together and to establish what it can tell us about the development of New Zealand society”.

“Sometimes this sort of material gets hidden away and forgotten about. What we want to do, particularly in the wake of the earthquake, is to say 'we've got this fascinating material right here at UC. Come and look at it’.”

Thirty-seven writers – among them University of Canterbury academics and scholars from the wider Christchurch community – consider material ranging from medieval European manuscripts to Maori whakapapa books.

Among the rare treasures surveyed is a 1494 Lübeck Bible, the only one in the southern hemisphere; papers from the April 1946 to November 1948 trials of Japanese war criminals, which have been inscribed on UNESCO’s Memory of the World Asia Pacific register; and an original printing of the 1611 King James Bible.

“There are some remarkable items in the collection. We have a fifteenth-century English genealogical roll, which is 16 feet (almost 5 metres) long. It’s an unusual and unique item, a family tree written by hand ostensibly from Noah down to the English king Edward IV.”

Dr Jones said readers of the book will not only gain insight into a unique collection of books and photographs, but also increase their knowledge of the factors that shaped a colonial university library and book collecting in the nineteenth and twentieth centuries.

Treasures of the University of Canterbury Library and Canterbury Tales will be officially launched on 17 May at the Canterbury Museum.