Newly published research, led by a University of Canterbury scientist, could hold the key to prioritising conservation needs in New Zealand and overseas. 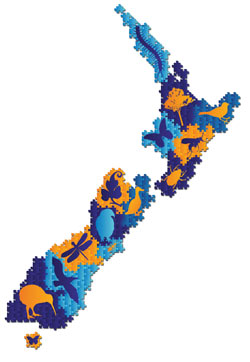 Newly published research, led by a University of Canterbury scientist, could hold the key to prioritising conservation needs in New Zealand and overseas.

The research, published this week in the journal Science, is the result of work done by UC’s Dr Daniel B. Stouffer (Biological Sciences) in collaboration with academics in Spain and the United States.

The work could also be useful for gauging the threat of introducing new exotic species to New Zealand or elsewhere and prioritise the species to avoid.

The paper, titled "Evolutionary conservation of species' roles in food webs," describes how the researchers found that the importance of species in food webs depends more on what kind of species it is and its evolutionary history than where in the world it is found or even the other species that surround it.

By studying the roles played by species spanning 32 communities from around the globe, the authors found that closely related species tended to be of similar importance. This means that, within a community, the most important or keystone species can be easily identified based on taxonomic information alone. From a conservation perspective, this is key as it provides a baseline to prioritise conservation efforts.

Dr Stouffer said the most striking thing was that "we found that taxonomic information - species evolutionary histories - not only provided a baseline within a community, but held across the entire set of food webs”.

"We tend to think of New Zealand ecosystems as completely different to their foreign counterparts because, at least to the naked eye, they are," said Dr Stouffer. In contrast, however, their results showed that species from the most important taxonomic groups in New Zealand also tended to be the most important elsewhere, and vice versa.

According to Dr Stouffer, this last result was the most surprising and likely carries with it "strong implications".

"Most ecological research is focused on specific communities and there is a widespread feeling that what happens in one place might not represent what happens elsewhere. What we show, instead, is that species worldwide seem to be playing by the same rules and that our work might be a first step toward developing global conservation guidelines and priorities."

Dr Stouffer carried out the work in collaboration with Marta Sales-Pardo from Universitat Rovira i Virgili in Tarragona, Spain, M. Irmak Sirer from Northwestern University in Illinois, United States, and Jordi Bascompte of Estación Biológica de Doñana in Seville, Spain.