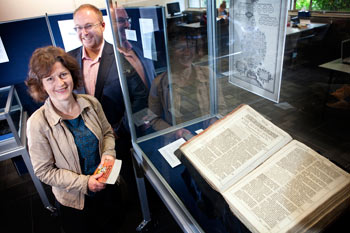 Only 20 people have received the award since 1961.

Ms Matthews is UC's liaison librarian for special collections. She works as a reference and liaison librarian in European languages and music, and is particularly interested in the use of rare books for teaching.

The Treasures of the University of Canterbury Library project was led by Dr Jones. As one of the general editors, Ms Matthews worked closely with him and played a pivotal role in all aspects of the book’s production. She made many of the selections for items to be included in the book, and suggested many of the authors.

"Bronwyn was crucial to the production of the book and without her it would not have achieved the high academic standards that I believe it has done; nor would it have reflected the breadth and range of our collections in the way that it does," Dr Jones said.

"I considered her, throughout, very much my partner in this enterprise. I found her own contributions to the volume to be extremely well-researched and exceptionally well-written."

Ms Matthew’s role was as one of the general editors. She possessed in-depth knowledge of the UC collection, without which the project would have been impossible to complete, Dr Jones said.

The award citation said her article on the history of the UC library, which prefaces the volume, was considered an important service to librarianship.