Predicting the collapse of pollinators 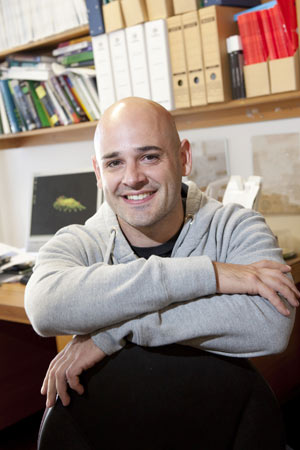 Professor Tylianakis (Biological Sciences) worked in collaboration with scientists in Argentina on research that shows, for the first time, that it is possible to predict which relationships between plant species and pollinators, such as particular bee species, are most under threat. The team’s work was published this week in the prestigious journal, Science in a paper titled “Specialization and rarity predict non-random loss of interactions from mutualist networks”.

Their work, which was led by Argentinian scientist Professor Marcelo Aizen from the Universidad Nacional del Comahue and the Museo Argentino de Ciencias Naturales, showed that the most vulnerable interactions between plants and the insects that pollinated them were rare or highly specialised partnerships.

“Those plant and bee species that depend most strongly on each other will be the most likely to suffer from environmental changes, and this accelerates the extinction of both plant and pollinator species,” said Professor Tylianakis.

The research also showed how the network of insects involved in pollination is disrupted not randomly but in a consistent way, which is why they can now predict which relationships are the most at risk.

Earlier published research by Professor Tylianakis’ group showed that climate change and widespread fertiliser use can disrupt the relationship between plants and pollinators. One example was by making flower nectar less nutritious for bumblebees causing them to die more quickly.

“In nature, a diverse array of bee species pollinate a diverse array of plants, and these connections form an elaborate network that has properties in common with social, computer, and neural networks,” said Professor Tylianakis.

The research team knew the way the pollination network was put together was important for the entire ecosystem, and that it could be altered by human activities. However, until now scientists could not predict which interactions would be affected and whether other insects or bees could do the work of those that were affected. The team’s latest research shows they can now make these predictions, which means a greater chance to maintain pollination networks and conserve the species that keep the world’s food crops growing.