Amidst the distinct sounds of Cook Island drums and music, a warrior welcomed the Honourable Henry Puna, Prime Minister of the Cook Islands, to the University of Canterbury. 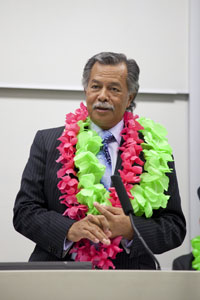 Amidst the distinct sounds of Cook Island drums and music, a warrior welcomed the Honourable Henry Puna, Prime Minister of the Cook Islands, to the University of Canterbury.

As part of a country-wide tour to meet with his compatriots, the Prime Minister visited UC on 15 March.

The meeting was opened with a prayer and devotion by Pastor Joseph Maea of the Cook Island Christian Church. It was followed by a free and frank – sometimes light-hearted, at other times serious - exchange of views which was begun by the Prime Minister.

Mr Puna reported that the framework for development in the Cook Islands was a fundamental paradigmatic shift towards performance-based government policy. And, although it was ruffling some feathers in the public sector, it was having a positive impact on the Island’s political culture.

Mr Puna talked about the importance of renewable energy, particularly solar power, as a viable alternative to fuel-based sources. Good clean water was also an important issue as was climate change, particularly in low-lying atolls which form a significant part of the Cook Islands. The Prime Minister noted the increase in youth suicide was becoming a concern for the government.

In terms of economic growth, Mr Puna talked about the importance of the tourism industry which presently accounts for around 80 per cent of the Island’s gross domestic product.

Members of the Cook Islands community raised the issue of immigration and whether it would be possible in the future to draw on their pension whilst living back in the Cooks. Mr Puna said he would encourage Cook Islanders overseas to return to work and live in the Cooks.

In addition to the Cook Island community UC Council member Dr Kiki Maoate and Lincoln University’s Assistant Vice-Chancellor (Maori and Pacific) Professor Hirini Matunga, both of Cook Island descent, were present. Dr Malakai Koloamatangi, Director of the Office for Pacific Excellence and Acting Director of the Macmillan Brown Centre for Pacific Studies welcomed the Prime Minister on behalf of UC.