A book dedicated to the work of French film director Jacques Rivette has been a labour of love for University of Canterbury's Dr Mary Wiles (Humanities). 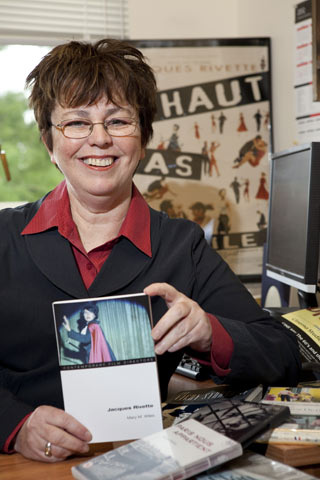 Dr Mary Wiles has written a book about French film director Jacques Rivette, who she met in a Paris cafe almost 15 years ago

A book dedicated to the work of French film director Jacques Rivette has been a labour of love for University of Canterbury’s Dr Mary Wiles (Humanities).

Jacques Rivette, has been a project 15-years in the making for Cinema Studies Coordinator Dr Wiles after she began postgraduate work on the director, who had been part of the New Wave, a film movement in 1950s and 1960s France.

Since then Dr Wiles has become an international expert on his films, which deal with issues around feminism and theatricality in film. Meeting the famous director in a Paris cafe, while researching her thesis in 1999, was a highlight of her career.

“This book ultimately is a culmination of the thesis I wrote way back then. It began there but includes all his films and is a more in-depth and comprehensive study of his work,” she says.

“I summoned the courage when I was in Paris to call him and ask him for an interview.  That interview is published in this book. I had read all the articles on him, all the interviews, but meeting him in person was invaluable.

“He is an avant-garde, experimental filmmaker so I didn’t know what to expect. He could have been very austere, intellectual, distant and difficult but he was very generous with his time. He was funny, causal, friendly and easy to talk to during the several hours I had with him. Meeting him really stimulated my interest and fuelled my research that culminated in this book.”

Dr Wiles says she wanted to write the book because, despite his popularity in France, there are limited publications on his work in English.

“Rivette is well known in France but there hasn’t been much published for Anglophone film aficionados. There was a big gap in scholarship, which has provided me with this incredible opportunity.  His films address the relationship of film with other arts, theatre, painting, literature, dance and music. For me it was fascinating project not only because it allowed me to look at magnificent films but because I was forced to broaden my disciplinary interests in order to deal with these films,” she says.

“I also felt that it was important to retrieve this directors first-person perspective before time ran out. We need to grasp such opportunities whenever they present themselves because important artists like Rivette, and others from that generation who have lessons to teach us, will soon not be around to talk with us. Rivette is 84 years old now and has not yet retired. He just released a new film in 2009, 36 vues du Pic Saint Loup.”