Professor Rick Millane (Electrical and Computer Engineering) has become the first New Zealander to be named a Fellow of SPIE, the international society for optics and photonics. 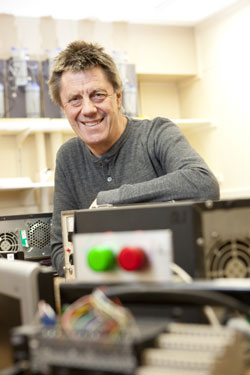 Professor Rick Millane (Electrical and Computer Engineering) has become the first New Zealander to be named a Fellow of SPIE, the international society for optics and photonics.

Professor Millane is one of 75 new fellows of the society to be announced this year. Fellows are members of distinction who have made significant scientific and technical contributions in the multidisciplinary fields of optics, photonics, and imaging. They are honoured for their technical achievement, for their service to the general optics community, and to SPIE in particular.

Professor Millane was recognised for his achievements in diffraction and reconstruction algorithms for biophysical imaging.

He said he was delighted and honoured to be named a Fellow.

“I have been involved with SPIE for many years. It is a great professional organisation that runs a very diverse range of programmes as optics and photonics now span much of science and engineering, from traditional optics to energy to nanotechnology and to communications, to name but a few. Of course this recognition reflects not only my own efforts, but also those of the many talented students and colleagues whom I have had the good fortune to work with over the years.”

The society said Professor Millane had made important contributions to imaging and image reconstruction in biological and medical imaging.

“His work in the area of phase retrieval was especially pioneering when, in 1990, he made fundamental connections between classical phase retrieval techniques in crystallography and those in optics. Millane’s discoveries paved the way for high-resolution diffraction imaging of atomic, molecular and cellular particles.”

“In addition, he has contributed to the theory and algorithms for using x-ray diffraction data from biological polymer fibres to image molecular structures. His accomplishments include establishing methods for image analysis of diffraction patterns, derivation of rigorous metrics for assessing the precision of results and developing Bayesian methods for optimal reconstruction. Most recently, Millane extended his work into image analysis of disordered biological arrays in muscle and the retina and image reconstruction for optical diffusion tomography.”

The society said Professor Millane is “a vital member of the greater optics community.”

He is a fellow of the Optical Society of America (OSA) and a senior member of the Institute of Electrical and Electronics Engineers (IEEE). He has served on the technical programme committee for the OSA Topical Meetings on Signal Recovery and Synthesis since 1992 and he is currently an associate editor of the journal IEEE Transactions on Image Processing. He has also served as co-editor of the International Union of Crystallography’s journal Acta Crystallographica Section A since 2001. He co-created the SPIE Image Reconstruction from Incomplete Data conference in 2000 and has co-chaired the biannual conference since then at the SPIE Optics and Photonics symposium.