Computer scientist Tim Bell has won this year's University of Canterbury Innovation Medal which honours efforts to have academic research adopted into the wider community. 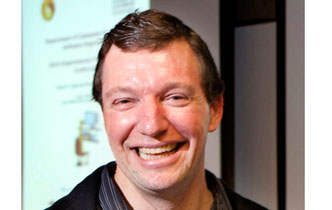 Computer scientist Tim Bell has won this year’s University of Canterbury Innovation Medal which honours efforts to have academic research adopted into the wider community.

Professor Bell’s creative work in developing new materials and methods for teaching basic computer science and implementing them on a global scale has had enormous impact around the world.

He has worked tirelessly to have the novel approach to teaching computer science described in the book adopted by school districts and by university-based science outreach projects all over the world. It is recognised and celebrated as an international movement among math and science educators.

Lucinda Sanders, chief executive of the US National Centre for Women and Information Technology in Colorado, said Professor Bell had been unwavering in his commitment to their mission to significantly increase girls’ and women’s participation in computing.

"His Unplugged activities are among our most widely distributed and most downloaded resource,’’ she said.

"The ideas that he has promoted with such success seem to be changing the face of computer science education internationally, with interest groups in many countries,’’ Professor Witten said.

Professor Bell said his work on CS Unplugged began in 1989 when he developed exhibits for an initiative that became the Science Alive science centre in Christchurch.

"It took a new direction in 1992 when I was asked to explain computer science to my then five-year-old’s class at school. I developed some novel ways to communicate to the students using games, tricks and puzzles to get to the heart of computer science without the distraction of using a computer.

"Since then, and through collaboration with many colleagues around the world, using Computer Science Unplugged as a way to teach has become well-known in the world of computer science education.’’

The Innovation Medal, the first of its kind in New Zealand, was awarded for the first time last year to Keith Alexander for his outstanding development of the world-leading spring-free trampoline. Professor Bell will receive his medal at a presentation on campus on October 4.