The former president of Poland Aleksander Kwasniewski was at the University of Canterbury this week to deliver the thirteenth Europa Lecture. 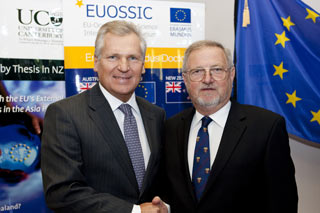 The former president of Poland Aleksander Kwasniewski was at the University of Canterbury this week to deliver the thirteenth Europa Lecture.

Chancellor Dr John Wood welcomed the former president and outlined his background including his contributions as president in developing a Polish Constitution and achieving Polish membership in both NATO and the European Union.

Mr Kwasniewski, who spoke about the History and Future of Poland as an independent nation and as part of the European Union to an audience of 90 people, said the long and proud history of Poland and its difficult geo-political position had impacted strongly on its historical events.

Mr Kwasniewski added there were great challenges faced by Poland in the 1980s and 1990s with the collapse of the Soviet Block, but incredible changes have been accomplished in the last 20 years including democracy, a strong market economy and a growing position as a political player on the European and world stage.

The former president was hosted by the National Centre for Research on Europe as part of the European Union Centres Network and in conjunction with the Ministry of Foreign Affairs and Trade.