Food safety under the microscope

All you've ever wanted to know about food safety can be found in the latest book by toxicologist and food safety expert Professor Ian Shaw. 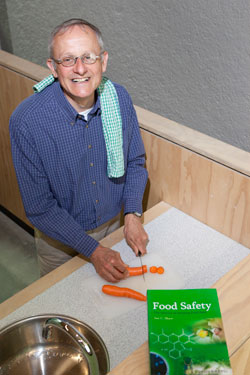 All you’ve ever wanted to know about food safety – from the natural toxins produced by cucumbers to the bacteria, parasites and viruses that cling to our food – can be found in a new book by UC toxicologist and food safety expert Professor Ian Shaw.

Professor Shaw (Chemistry), who is one of the specialists on the TV3 programme What’s Really in Our Food?, said Food Safety: The Science of Keeping Food Safe offered an extensive introduction to the increasingly popular subject.

“This book is in response to a significant increase worldwide in the number of courses being offered in food safety at universities and polytechnics, and a lot of medical courses are beginning to include food safety in their teaching.”

Professor Shaw said while the book was aimed at students studying food safety, it would also be of interest to those working in the food industry and those who have a general interest in the topic.

“Nowadays we simply won’t accept risk associated with eating – we don’t expect to be ill after eating our dinner, and, if we are ill we want to blame someone – usually the restaurant we last ate in. Just a hundred years ago no one thought about food safety, but since then we have learned a great deal about the bacteria, viruses and parasites that might be lurking in our food. And in the past few decades chemical contaminants have come to the fore: what are the natural toxins, environmental contaminates and pesticide residues in food doing to us?”

Professor Shaw tackles all of these issues and more in his book, which he believed was the first to bring all aspects of the subject together in one volume.

“This is a major work for me and it’s written in a way that anyone can pick it up and read.”