UC researchers are fine tuning a high-tech powered exoskeleton lower-limb device which will assist patients recovering from injury and help the elderly by moving their legs. 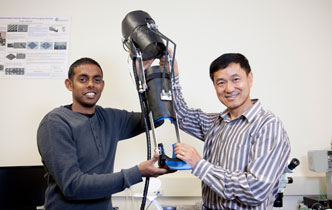 University of Canterbury researchers are fine tuning a high-tech powered exoskeleton lower-limb device which will assist patients recovering from injury and help the elderly by moving their legs.

UC mechanical engineering professor XiaoQi Chen has been overseeing the building and testing of the current UC prototype exoskeleton device which provides assistance to the knee joint.

"The device is worn by the user to assist limb movement. It operates on an ‘assist-as-needed’ principle. We will conduct clinical trials in the future, but currently we are only testing on able-bodied people for preliminary experiments," he said.

"Our device does not force movement of the patient along a predefined path but it assists the movement as directed by the user. We are improving the current prototype and sensor systems to allow greater freedom and better control of the exoskeleton system.

"We expect to be able to run more significant trials in late February or March."

He said the exoskeleton device could potentially have huge applications in automated rehabilitation. The testing of a second prototype, on both able-bodied users and those with limited mobility, will be a substantial step toward the device being used on patients in need.

Though the device was designed to support the knee joint, it could be adapted to support other body joints especially in rehabilitation for upper-limbs, he said.

UC’s mechanical engineering team has designed the entire exoskeleton system with background knowledge of the field based on research undertaken by PhD student Mervin Chandrapal.

"This cutting-edge technology will be a huge assistance to partially disabled people by reducing the effort required to perform their movement. The exoskeleton actively estimates the user’s intended movement using the user’s own biological signals and then provides assistive force to reduce the muscular effort required to execute knee extension and flexion motion.

"As well as supporting the elderly to perform activities of daily living the device could assist a patient recovering from an injury by reducing the load on the limb, or in an industrial environment, it could provide assistive force to workers performing repetitive task that require significant muscular effort.

"It could reduce the cost usually associated with intensive hands on therapy. Also, a home based rehabilitation system could significantly shorten the recovery time."