Five engineering students proved they had the right communication skills to make it in the professional world after winning $2000 worth of prizes for their project reports. 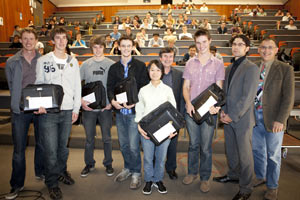 Five engineering students proved they had the right communication skills to make it in the professional world after winning $2000 worth of prizes for their project reports.

The five first professional year students in UC's Civil and Natural Resources Engineering Department were deemed to have the best portfolios of professional engineering communication works after taking part in a departmental competition recently.

The top prize went to Tom Logan, who received a $1000 prize at an awards ceremony held in E8. Lorraine Tang was placed second ($500) and third place was taken out by Max Ferguson ($300). Daniel McMullan and Nik Scarr received honourable mention prizes of $100.

Associate Professor Mark Milke (Civil and Natural Resources Engineering) said the aim of the competition was to improve the communication skills of graduates. While portfolio submissions were voluntary, 43 students took part.

“The portfolio project is ongoing and is intended to be required for all students in Civil and Natural Resources Engineering prior to admission to third professional courses in 2014,” he said.

“Employers consistently tell us that the communication, particularly writing, skills of our graduates are their greatest weakness. Changes in professional accreditation requirements by IPENZ also are moving us towards curriculum changes to ensure students are better writers. ACENZ believes that improvements in writing and communication skills are critical for young consulting engineers to better serve their clients and the public.”

Professor Milke said students were asked to take three pieces of work – an engineering sketch of a timber connection; a reasoning report related to the environmental effects of fracking; and a laboratory report – they had previously submitted and polish them to professional standards. They were supported in their efforts with workshops, written advice and one-on-one tutorials.

Professor Milke said the event was aided by a $5000 Teaching Development grant from the UC Learning and Teaching Committee which allowed the department to use the skills of Dr Creon Upton who developed learning materials and co-ordinated the teaching programme.