The first academic conference dedicated to the Central Otago gold rush will be hosted by the University of Canterbury this month and could lead to a ground-breaking book. 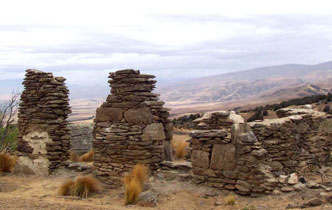 The first academic conference dedicated to the Central Otago gold rush will be hosted by the University of Canterbury this month and could lead to a ground-breaking book, according to UC PhD candidate Lloyd Carpenter.

The conference to celebrate the sesquicentennial of the gold rush, 150 Years of Riches: The Central Otago Gold Rush 1862-2011, will be co-hosted by the Otago Goldfields Heritage Trust and held in Central Otago from 29 to 31 August.

Lloyd, who is a Ngata Centennial Doctoral Scholar and is convening the conference, says it will be a significant event with 29 speakers over three days ranging from Department of Conservation experts to historians and archaeologists.

It will include two keynote speakers - Dr Warwick Frost, from La Trobe University in Melbourne, Professor Tom Brooking from Otago University, and a keynote panel of academics from Monash University.

“This is about looking at old history with new eyes. I think people who attend won’t look at the area in the same way again,” he says.

“They will see that the history is all around them and learn things that have never been discussed before. Speakers will talk about how the gold rush fitted into historic gold rushes across the world. We have experts showing it was part of a global shift in the world with real societal changes. If you were lucky and worked hard you could go from being a miner to being wealthy, and people did that.”

Lloyd says he hopes to be able to create an entertaining event as well as provide a book from the event.

“The goal of it is to celebrate 150 years since gold was first discovered in this country. It’s something I thought would be significant - to look at a series of events that changes the South Island's history. I thought if we didn’t celebrate it this year, it would be something people would look back at and see as a missed opportunity. The community is celebrating the milestone really well so it’s important the academic community does as well,” he says.

Registrations are at a healthy level, but Lloyd says he is happy to accommodate last-minute additions from those who would like to come along.

“Astonishingly there is no academic texts on the gold rush in New Zealand. We have academic level journal writing, and good theses, but they are not in book form. I hope to edit a book that would become the ‘go to’ book for anyone wanting to understand the gold rush from an academic viewpoint. The who, where, why and when type of questions. I want to get away from the myths and look at what really went on," he says.

“We have a very rich history to appreciate. We had our own gun fights and our own ‘wild west’, but because it’s not written about we appropriate Australian and Californian myths and apply them to our gold rush. It’s going to be a very exciting few days."