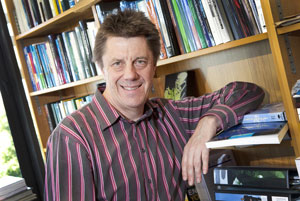 Professor Millane was one of four academics from New Zealand universities awarded fellowships in this round. The fellowships are for two years starting early in 2012 and are full-time positions. They provide funding to each recipient of $110,000 per year covering salary and expenses, allowing researchers to undertake concentrated work in their fields of expertise for that period.

The fellowships, administered by the Royal Society of New Zealand on behalf of the Government, are awarded to researchers who demonstrate that they have achieved national and international recognition in their area of scientific research.

Professor Millane said he was delighted and honoured to be awarded the prestigious fellowship.

“The benefit of the fellowship is that it will allow me some uninterrupted time to devote to research that I hope will contribute the New Zealand’s skill-base and stature in biomolecular imaging.”

“Structural biology, the study of the three-dimensional structures and function of biological macromolecules, is critical for our understanding of biological processes and the prevention and treatment of disease,” said Professor Millane. “However, the key technique for molecular structure determination, protein x-ray crystallography, is limited to only a small fraction of biological macromolecules. Biomolecular imaging is, however, currently undergoing a revolution as a result of the recent availability x-ray free-electron lasers.”

“This is a new area of research and the success of the technique will depend on solving a number of challenging data processing problems,” he said.

Professor Millane’s project is concerned with developing novel theoretical approaches, and novel and efficient computer algorithms to address these problems.  His work will involve collaboration with a number of large laboratories around the world and the outcome of the work will be techniques that can be used by structural biologists internationally to study a much wider range of biological macromolecules than is currently possible.

Professor Millane joined UC in 2001 and is currently HOD in the Department of Electrical and Computer Engineering. His expertise is in computational imaging with applications in biophysics, medical imaging and remote sensing. He is a Fellow of the Optical Society of America.