Prime Minister and UC alumnus the Rt Hon John Key officially welcomes a new era in supercomputing at the University of Canterbury today. 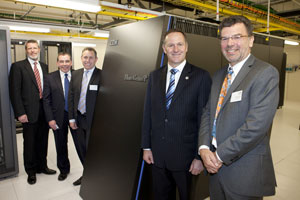 Prime Minister and UC alumnus the Rt Hon John Key officially welcomes a new era in supercomputing at the University of Canterbury today.

Mr Key will be on campus as UC celebrates its BlueFern High Performance Computing (HPC) capacity being boosted tenfold with an upgrade to its computer architecture.

“This new computing architecture allows us to think and do the previously unthinkable,” says Professor David. “It maintains our status in the international research community and, in coming months will provide Canterbury with a resource that helps us get the region back on its feet.”

Professor David says the upgrade provided by corporate partner IBM heralds a “step change” in what New Zealand researchers can do.

“The new architecture gives us more memory and more processing power. It enables us to tackle a big problem and divide it into small but manageable and countable chunks and scales it. Instead of dividing a problem by ten it can be divided by tens of thousands.”

Professor David says as a result of the upgrade the BlueGene L, the supercomputer that has been based at the University since 2007, will be redeployed solely for educational purposes along with a smaller Power 7 system.

“This will put UC in the unique position of being the first university or research establishment in the world to provide a BlueGene supercomputer for student access.”

Since 2009 the University of Canterbury has been offering courses in high performance computing – and was the first tertiary institution in Australasia to do so – but now as part of these courses students will go beyond a theoretical understanding and have dedicated time on a state-of-the-art supercomputer to expand their skills base.

BlueFern will also be offering block courses to industry utilising the BlueGene L.

This upgrade to UC’s High Performance Computing facilities was made possible by the Government’s announcement earlier this year that it was making a $27.4 million investment in National eScience Infrastructure (NeSI) over the next four years with $21 million in co-investment coming from a consortium including three key partners – UC, the University of Auckland and NIWA.

Of this co-investment UC has pledged to contribute $8 million over the next four years, building on previous significant investment in high performance computing and showing the University’s commitment to investing in infrastructure that provides a world-class learning environment for students and researchers.

“It’s very exciting to begin building an infrastructure and services that New Zealand researchers will be able to depend on over the long term. We have worked with BlueFern for several years now, and recognise its leadership in providing high performance computing services and educational opportunities critical to our ongoing success in science and engineering.”