UC will soon celebrate 100 years of teaching and research at the Cass field station, which has been immortalised in the painting by famous New Zealand artist Rita Angus. 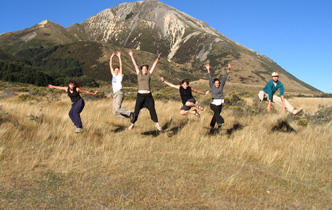 The University of Canterbury will soon celebrate 100 years of teaching and research at the Cass field station, which has been immortalised in the painting by famous New Zealand artist Rita Angus.

The 1775ha high country station, Cass Mountain Research Area, is near Arthur’s Pass National Park and has been a core part of the university’s teaching and research for the last 100 years.

Rita Angus was an arts student at University of Canterbury, where she studied from 1927 to 1933. Perhaps her most famous painting, Cass, was completed in 1936. The station is the first and oldest university field station in New Zealand.

The Cass station land was endowed to the university in 1873 by the Canterbury provincial government, but was not used for research or teaching activities until the field station was commissioned in 1914. The first building comprised two bunkrooms and a living area, costing £175 for the building and £20 for the mattresses.

Professor David Norton says the university plans to mark the 100th anniversary of Cass on December 6 and 7. The celebration will include a symposium with presentations on the history of research and teaching at Cass by university staff, some of whom are now retired, and some short presentations on recent research activities by current staff, postgraduate students and other notable external researchers. An open day will be held at Cass on the second day.

"The idea of a mountain research station was first promoted by Canterbury scientists Charles Chilton, Leonard Cockayne and Robert Speight in 1908 with the initial focus being Broken River where the rail terminus was at that time. The location was shifted to Cass in 1910 as the railway line extended further west.

"Recent research highlights include the extensive studies by the university’s Freshwater Ecology Research Group led by Professor Angus McIntosh on the streams and wetlands of the area and a major experimental study led by Professor Jason Tylianakis on the effects of climate change on tussock and their associated invertebrate communities.

"Most importantly Cass’s value emphasises the connection of the university with the people, culture and environments of Canterbury. It is a key site for nationally and internationally important natural history research,’’ Professor Norton says.