Well, every year at this time, Arthur Porritt and Harold Abrahams dined together (with their wives) to commemorate their 100m sprint at the 1924 Paris Olympics! Porritt wins Bronze for New Zealand and Abrahams wins Gold for Britain.

Yes, the man who laid the foundation stone for James Hight Library (Central Library) on 2nd May 1970, was Arthur Porritt, in fact, Sir Arthur Porritt, the 11th Governor General of New Zealand. 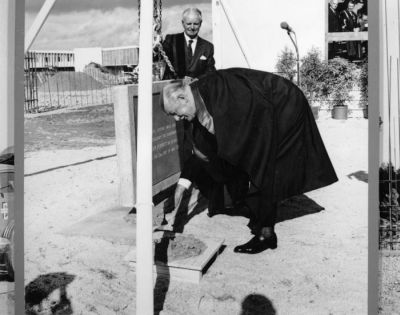 Porritt Park at Wainoni Christchurch is named after him.

Chariots of Fire, a movie that tells the story of the 100m sprint at the 1924 Paris Olympics. The movie was nominated for seven Academy Awards and won four, including the Best Picture in 1981. Arthur Porritt, the Bronze medallist, was known as “Tom Watson” from New Zealand. It is believed that it was out of modesty that he refused to use his real name in the film.

No ordinary Man: the remarkable life of Arthur Porritt is available at the Central Library.