Art in the Library #3

Art in the library 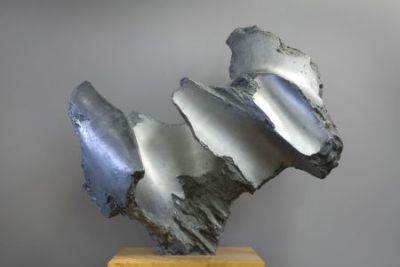 Part of the UC Sculpture Trail, this striking sculpture constructed from an amalgam of lead, tin and antimony by Italian artist Francesco Somaini (1926-2005) is located on the ground floor of the EPS Library. The Navigator was purchased for the University by the Ministry of Works in 1966, specifically for the new Science Lecture Theatre block that the Ministry was constructing at the time. Known as ‘Nauta’ in Italian, the work was part of the travelling exhibition ‘Contemporary Italian Sculpture' which toured New Zealand in 1965.

‘Nauta’ uses the juxtaposition of surfaces to create a sense of tension and movement. This work illustrates how rough edges and folds were utilised by Somaini to cast shadows, adding to the feeling of volume and space. The violence in the twisted shape and its rough external edges, is contrasted by the smoother surfaces and the cold, solid nature of the metal.

It was this very contrast that appealed to Professor John Simpson, former Head of the School of Art, who was the driving force behind the purchase. Simpson felt that the contrast between the works lava like surface and the smooth machined finish evoked humanity’s efforts to control nature. Simpson also described the work as being especially significant in the New Zealand context because of the connections it makes to the ideas of exploration and discovery through its title.

Francesco Somaini was born in 1926 in Lomazzo, Como, Italy. He began sculpting and attended art classes as early as 1935, but was not immediately set upon a career as an artist. While studying classics and reading for a doctorate in law, Somaini was an occasional student of the Academia de Brera in Milan. Known for placing a great emphasis on materials and techniques, Somaini exhibited widely throughout Europe, and completed a number of large scale commissions.
Here is a fascinating Youtube clip of Somaini constructing a similar work called Fuoco:


Learn more about the UC Art collections and how to access them on our website.
For further information, please contact Lydia Baxendell, UC Art Collection Curator.


What to read next: