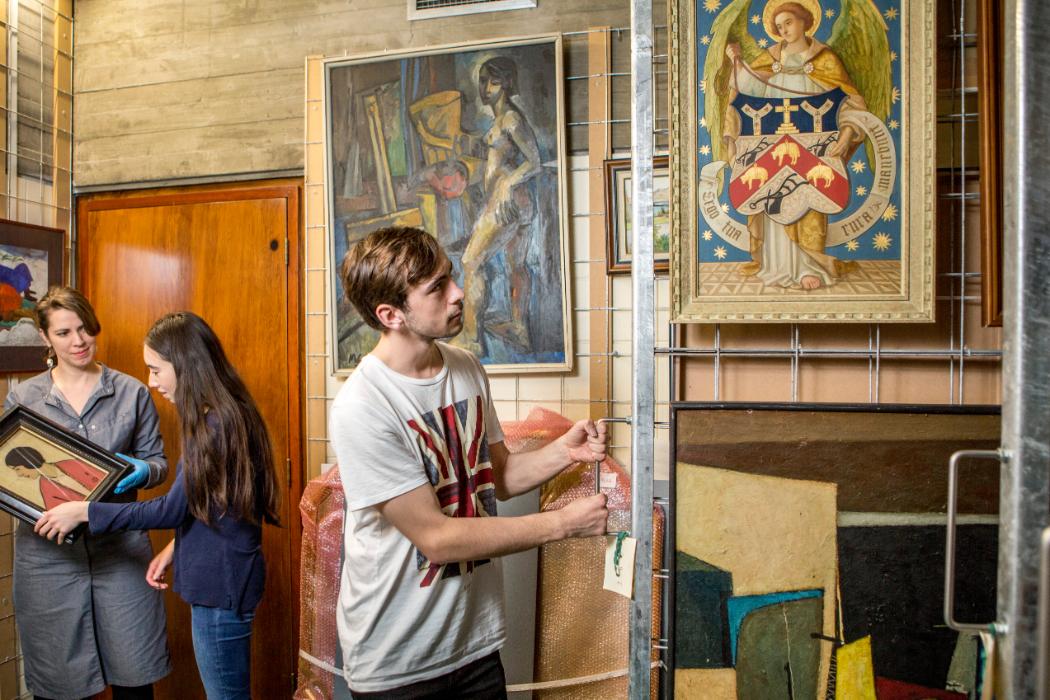 There are approximately 4,985 works in the UC art collection, making it one of the largest art collections in the region. The major strength of the collection is its representation of Canterbury art and artists, in particular those who have taught or studied at the University or at the College of Education.

A small proportion of the art collection is now available for viewing online. As the library is able to digitise works and negotiate copyright clearance, the online resource will continue to expand. If you cannot find what you are searching for online, please contact the Art Collections Curator for assistance.

The art collection comprises 13 separate sub-collections, each with its own strengths and unique character, including;

The Macmillan Brown Library was established in 1935 as a bequest from Professor John Macmillan Brown. Since then, various donations have been made to the Library, mostly of works by artists who have had an association with the University or with the Canterbury region.

A major strength of the Macmillan Brown Library collection is its holdings of artworks relating to the early European settlement of Canterbury. Included in the collection are 155 paintings or drawings, and 5 sketchbooks by the Harper and Acland families, which are mostly pencil sketches and watercolours dating from the 1850s to the 1890s. These works illustrate the history of the Canterbury high country stations including Mt Peel Station.

The Library holds a collection of 75 watercolours and drawings by Ursula Bethell. A talented artist, Bethell is better known as one of the pioneers of modern New Zealand poetry, and was an integral member of the arts community in Canterbury.

A minor strength of the collection is its representation of the work of commercial New Zealand illustrators, including Russell Clark, Alice Mair and Leo Bensemann. The collection includes 182 original drawings by Russell Clark from his NZ Listener series, many of which relate to Aunt Daisy's food column.

There are 70 drawings by Alice Mair, which were used to illustrate the books 'Homes of the Pioneers'. The books featured images of historical homes and buildings from the Canterbury Region.

There is also a large collection of over 100 works by Leo Bensemann, who was a driving force behind the Caxton Press.

The Macmillan Brown Library also houses a large collection of historic New Zealand and European prints, dating from 1665 onwards. Included amongst these are prints by John Webber (1751-1793), Francis Jukes (1746-1812) and John Cleveley the Younger (1747-1786), which all relate to the voyages of Captain Cook in the Resolution.

There are also original works by:

The School of Fine Art (SFA) collection comprises over 170 works, including prints, medals, sculpture, watercolours, drawings and oil paintings, executed mainly by artists associated with the School as both students and teachers.

In 1882 the Canterbury College School of Art opened with a total of 91 day and evening students. Closely affiliated to South Kensington in London, the school was traditional in its approach and tended to emphasise trade and craft related skills. From 1920 to 1930, the Canterbury School was at the forefront of the arts in New Zealand. Painting, and particularly the landscape, dominated. However, despite the influence of new artists and teachers from foreign shores, and the likes of 'The Group' (formed in 1927), the school was still largely conservative. Post war, the school began to focus much more strongly on fine arts, and throughout the 1960s and 70s grew gradually more experimental and innovative. Since 1950 Fine Arts has had full status as a University department, and was the first to move to the Ilam site in 1957, taking over Okeover House. Art History was introduced as part of the School’s programme in 1974 and in 1982 the Bachelor of Fine Arts degree was introduced.

Artists represented in the collection, who have taught or studied at the school, include:

She attended Canterbury College School of Art in 1918, studying plant drawing, design and embroidery. On her 21st birthday, Alison began collecting art when she received 10 guineas from her mother to purchase a painting.

William Smith MacGibbon was born in Edinburgh circa 1891 and came to NZ as a child. An accountant and businessman, William also served on the Christchurch City Council, and was involved in a variety of civic affairs and charitable organisations, including the Canterbury Society of Arts (CSA). He was awarded an OBE in 1952 for his work. In 1947, William married Alison MacLeod, and the two continued to acquire art for their personal collection.

The collection is comprised of 46 works, the majority of which were purchased largely between 1940-1960 from the annual sales at the CSA and from H. Fisher & Sons. The collection includes a discriminating selection of landscape paintings by artists who enjoyed a high reputation in Canterbury. Featured amongst the collection are;

For more information refer to A private view: pictures from the W.S. and Alison MacGibbon Collection, Julie King and Vickie Hearnshaw, School of Fine Arts Gallery, University of Canterbury, 1995.

Ernest Rutherford is considered one of New Zealand's most successful and respected scientists. Born in Nelson in 1871, he was educated at Nelson College for Boys, before attending Canterbury College. In 1892 he gained a BA in Pure Mathematics and Latin, and followed on with Master of Arts (with double First Class Honours) in Mathematics, Mathematical Physics, and Physical Science, and a BSc in Chemistry and Geology. In 1895 he began study at the Cavendish Laboratories in Cambridge where he conducted studies into electromagnetic waves, and radioactivity.

Rutherford accepted a professorship at McGill University in 1898, and remained there till 1907 when he transferred to Manchester University. He continued his studies into radioactivity, and applied them to the structure of the atom. In 1904 he was awarded the Rumford Medal, his first major science prize, followed by the Nobel Prize in Chemistry in 1908. After contributing to the war effort by studying means of detecting submarines, he capped his career by becoming the Director of Cambridge University's Cavendish Laboratory in 1919. Rutherford died in 1937, having been knighted and elevated to the Peerage as Ernest, Lord Rutherford of Nelson.

The Rutherford Medal Collection was placed into the University's care by Lady Rutherford in 1938, after the death of her husband the year before. She hoped that the collection would be preserved and if possible displayed by the College. The collection consists of 36 medals, insignias and plaques. Included are thirty four medals presented to Rutherford in his lifetime, (23 dedicated awards, and 11 commemorative) and a further two medals struck in 1971 to commemorate the centenary of Rutherford's birth.

The medals reflect various styles from Rococo to neo-classicism through to realism. Many of the medals were designed in the late nineteenth century, and in art historical terms, they provide valuable insight into the Paris-centred Belle Époque and the American Beaux-arts styles, seen especially in the designs of French and American medallists.

The library holds a large collection of original and secondary source material relating to Rutherford, including 26 academic diplomas, scientific papers, a short film and sound recordings.

Most material can be found via the Library catalogue. You can search for the manuscripts in Kā Kohika - see the Rutherford 'Popular Collections'.

The Library Art Purchases Committee was initially set up as a working group of the James Hight Building Committee, in 1993. The terms of reference for the committee were to acquire works that would visually enrich and enhance the library environment. Any medium could be considered, and works were sought from both up-and-coming and established artists.

At the time of the committee's disestablishment in 1997, the collection had grown to include 63 works by 39 artists. The majority of these works are currently on display throughout the University Library (Central Library, Macmillan Brown Library, EPS Library). As with the Art Purchases Committee Collection, New Zealand artists predominate, and the collection also reflects the development of contemporary Māori and women artists.

A minor strength of the collection is its representation of the ceramic artists, including Len Castle, Doreen Blumhardt and Tony Bond.

Artists represented in the collection include:

Established in 1988 on a student initiative, the Art Purchases Committee began with a modest fund to purchase and display contemporary art throughout campus.

The scheme has resulted in a collection of over 200 notable works of art, most of which are by contemporary New Zealand artists, many former students or teachers at the School of Fine Arts. The collection has a major strength relating to the rise of printmaking in New Zealand, and minor strengths in its reflection of the practice and philosophy of contemporary Māori artists and women artists. Artists represented in the collection include:

Over the course of the University's history, a number of works have been acquired for or donated to the University as a whole, rather than to a specific department or school. 34 of these works have been grouped together and classified as the Registry Collection. Recorded amongst the small collection at the Registry are works by New Zealand artists such as W.A. Sutton, Barry Cleavin, Tom Taylor, and Don Peebles. The collection also contains ceramic works by Mirek Smisek and Michael Cardew.

One of the University's rare pieces of sculpture also belongs in the Registry collection, 'The Navigator', by Italian sculptor Francesco Somaini (b.1926). The work was acquired by the University of Canterbury from the 'Contemporary Italian Artists' show, toured by the QEII Arts Council in 1966.

No signed works by the well known artist Grace Joel are held in the University's collections. However, there is a single attributed work in the Registry collection. This is an untitled oil painting showing a young woman in a garden at around the turn of the 19th century.

The companion collection in the Registry is the Portraits Collection of notable figures. These include;

The Christchurch College of Education (CCE) art collection is comprised of 260 works of art. The majority of the collection has been purchased for display, as well as to cater to the teaching programmes at CCE. A small portion of the collection came from a former art loan scheme for Canterbury Schools.

The collection consists mainly of contemporary works of art (post 1970) by Canterbury artists, many of whom have been students or teachers at the Christchurch College of Education. There is a strong representation of works of art by Māori and Pacific artists. A minor strength of the collection is the New Zealand studio ceramics from the 1970s. Some of the artists represented in the collection include: 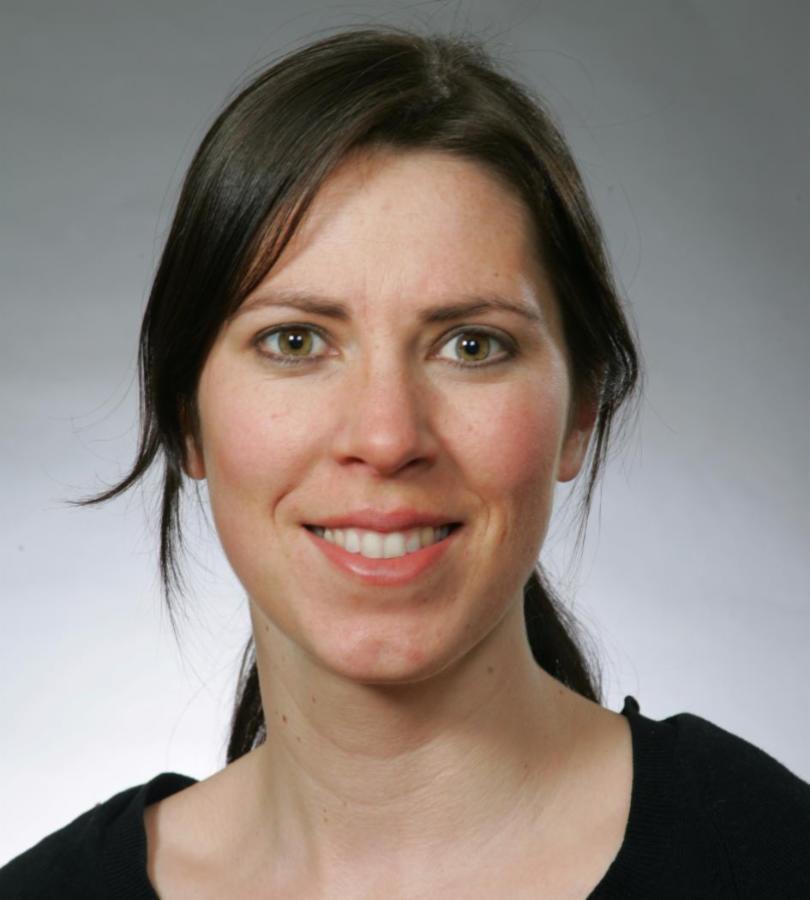