To track living, biological samples, AFM (Atomic Force Microscopy) needs to be operated in a fluid medium. An array of cantilever beams helps to scan the samples at a faster rate but the technology is yet to be established for the fluid environment. Our aim is to study and understand the effects of fluid properties on an array of oscillating beams and in particular, the fluid coupling effects (added mass and damping) on the overall dynamics of the system.

In this work we study the change in dynamics with changing gaps between beams and heights from the wall at low and high Reynolds numbers. The system is excited at the left-most beam while remaining beams are kept passive. The flow is considered to be incompressible and it is solved by using the boundary integral method.

The coupling effect between beams has been investigated for a three beam array. The focus is mainly on the behaviour of array of members close to the wall in the fluids. The hydrodynamic load increases with decreasing heights, damping is the dominating mechanism when it is closer to the wall at lower Reynolds number while added mass dominates at high Reynolds numbers for corresponding heights. The hydrodynamic load is comparatively low for high Reynolds numbers due to inviscid flow between beams. The effect on members close to the wall is significant compared to far away members, where the effect is almost negligible. 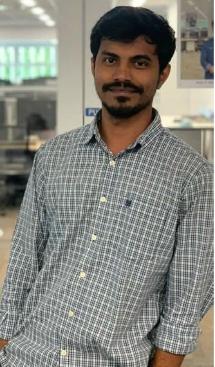