Combustion will remain a major source of energy for heating, energy production, and propulsion throughout the 21st century. With the need to reduce carbon emissions, H2 and H2-enriched fuels will gradually replace hydrocarbon (HC) fuels. Unlike HC fuels, the light molar mass of H2 causes thermal-diffusive effects that produce flame cells affecting stability, extinction and ignition. H2 cellular flames have been simulated in 3D with detailed chemistry and molecular transport with massively parallel computers but the computational expense has limited the number of simulations. Cellular tubular flames offer a symmetric 3D geometry that can be mathematically reduced to a 2D model solvable on a PC computer. The 2D cellular tubular flame model can be efficiently exercised to give insight into H2-air burning in cellular structures found laminar and turbulent flames. Quantitative measurements of cellular lean premixed H2-air tubular flames have been made using Raman scattering and laser-induced fluorescence (LIF) to measure major species concentrations, temperature, and flame radicals (OH, H). The H atom concentration is measured with a femto-second (fs) laser to avoid interference from laser photolysis that plagued earlier efforts. The LIF signals are corrected for collision quenching using measurements of major species concentrations and temperature by Raman scattering in the same tubular flames. The resulting multi-species concentration and temperature measurements are compared to a 2D cellular tubular flame model with detailed chemistry and multi-component molecular transport. The results show that the molecular transport needs to include the Soret effect but can be modeled with mixture-averaged transport formula that are not computationally expensive. The development of quantitative 2D models of cellular flame structures will give insight into flame enhancement and extinction due to thermal-diffusive effects in both laminar and turbulent H2 flames. 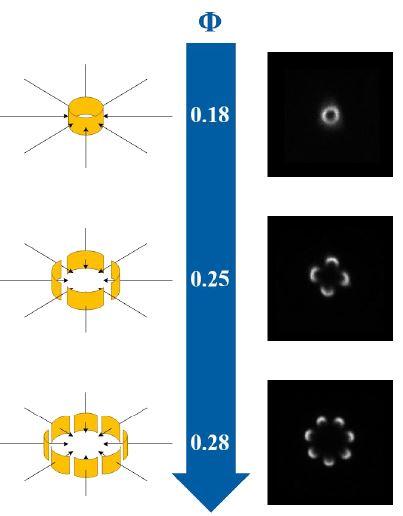 Robert W. Pitz received his B.S. in Mechanical Engineering from Purdue University in 1973. He received his M.S. and Ph.D. degrees in Mechanical Engineering from University of California Berkeley in 1976 and 1981. He spent 5 years as a research engineer at the General Electric Research Development Center in Schenectady, New York and came to Vanderbilt University in 1986. He is currently a Professor in the Department of Mechanical Engineering serving as Department Chair from 1998-2017 and Director of Graduate Studies from 1991-1998. He has published over 190 articles in laser diagnostics, laminar and turbulent combustion, turbulence-chemistry interactions, oxygen-enriched combustion, Raman scattering, laser-induced fluorescence, and molecular-tagging velocimetry. In 1987, he received the National Science Foundation Presidential Young Investigator Award for his research. He was awarded the AIAA Best Paper Award in Propellants & Combustion in 1996. He is the past Chair of the AIAA Propellants & Combustion Technical Committee and a registered professional engineer in the state of Tennessee. He is a Fellow of AIAA, ASME, and the Combustion Institute.