SQL-Tutor: an ITS for SQL programming

SQL-Tutor is a knowledge-based teaching system which supports students learning SQL. The intention was to provide an easy-to-use system that will adapt to the needs and learning abilities of individual students. The tailoring of instruction is done in two ways: by adapting the level of complexity of problems and by generating informative feedback messages. The architecture of the stand-alone version of the system is illustrated in the following figure.

SQL-Tutor is based on Constraint-Based Modeling (CBM), a student modeling approach proposed by Stellan Ohlsson.

It is a very efficient approach which concentrates on the violations of the basic principles in the domain of instruction. Currently there are more than 600 constraints in the system, which compiled into a structure resembling RETE networks, in order to speed up the matching process. The system also knows about various databases, problems and the ideal solutions to them, and uses this knowledge to diagnose students' answers. Currently the system only deals with the SELECT statement, but we believe that is not a serious limitation; the same approach can be used for other SQL statements, queries do cause most problems for students anyway, and many concepts covered by SELECT are directly applicable to other statements and other relational languages.

In order to adapt to individual students, SQL-Tutor maintains a model for each student. A student model contains information about the history of previous sessions (like a list of problems solved correctly etc) and also contains a model of the student's knowledge, expressed in terms of constraints.

When a student logs in for the first time, the system creates a new model, and lets the student select a database and a problem to work on. Every student solutions is analyzed (ie, propagated to the constraint network), and the system reports on its findings. There are several levels of feedback messages.

The work on SQL-Tutor started in 1996, and now there are three version of the system available, developed in Allegro Common Lisp, Franz Inc. 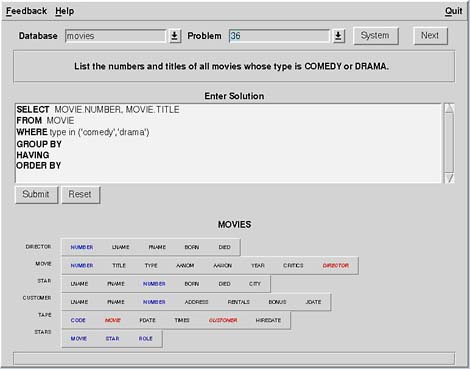 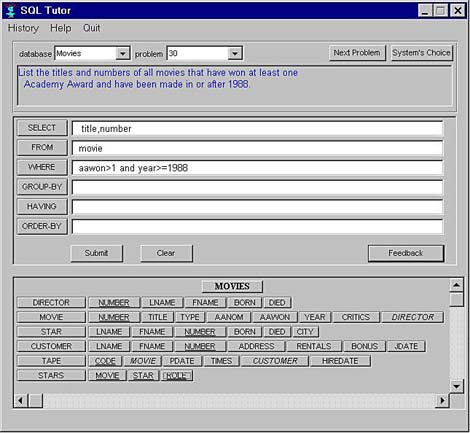 Interface of the Web-enabled SQL-Tutor: 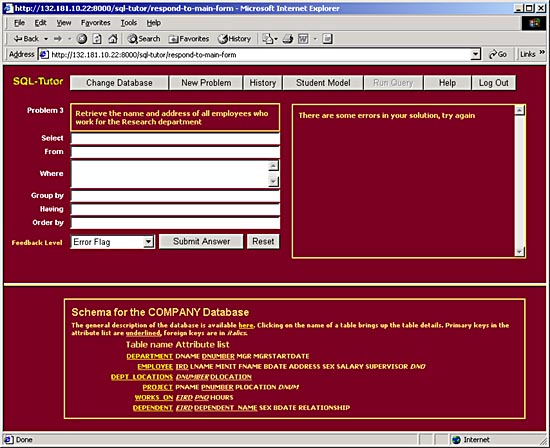 Try it out: SQL-Tutor on the Web.

(The Web version has been open to outside users on March 29, 2000. Currently only available to Canterbury students.)

The Windows version used to be available for ftp-ing. 1946 people have downloaded the system in the period May 1999 - January 2001. We stopped supporting the stand-alone version of SQL-Tutor. SQL-Tutor is now available through the Addison-Wesley's Web PortalDatabasePlace.

The first evaluation study was held in April 1998. We thank Franz Inc. for allowing us to use ACL in a way we were not licensed for; we could not perform the study otherwise. The purpose of the study was threefold:

There were 20 students involved in the study, concurrently enrolled in COSC313, a database course. The students have already learnt about SQL in the lectures (roughly 6 sessions), and had 4 weeks of practical labs, defining SQL statements on several databases implemented in Ingres, before the evaluation study. The study involved students using SQL-Tutor in a 2-hours laboratory session. At the end of the session, the students filled a user questionnaire.

Results are published in the paper: Evaluation of a Constraint-Based Tutor for a Database Language Mitrovic, A. Ohlsson, S. Int. J. on Artificial Intelligence in Education, 10(3-4), 1999, pp. 238-256.

The second evaluation study was held in May 1999, using the Web version of SQL-Tutor. The purpose of the study was threefold:

The students involved were enrolled in COSC313, a database course. The students had already learnt about SQL in the lectures (roughly 6 sessions), and had 4 weeks of practical labs, defining SQL statements on several databases implemented in Ingres, before the evaluation study. The study involved students using SQL-Tutor in a 2-hours laboratory session.

The second evaluation study was held in October 1999, using the Web version of SQL-Tutor. The purpose of the study was threefold:

The students involved were concurrently enrolled in COSC205. The study involved students using SQL-Tutor in a 2-hours laboratory session. Results are published in the following papers:

The goal of this study was to investigate the effects of a simple open student model on students' learning and self-assessment skills. The study is decribed in a paper presented at the international conference on Adaptive Hypermedia and adaptive Web-based systems AH 2002 (Malaga, Spain, May 29-31, 2002).

The goal of this study was to investigate how the scaffolding (and fading) effects students' problem-selection skills. The results are available in the paper presented at the 11th international conference on Artificial Intelligence in Education, AIED 2003 (Sydney, July 20-24, 2003).

The goal of this study was to investigate the effect of an adaptive problem selection strategy on students' learning. The results are described in a paper presented at the Adaptive Hypermedia conference (AH 2004)

In 2006, we investigated the effects of problem templates on learning - the results were presented at AIED 2007: