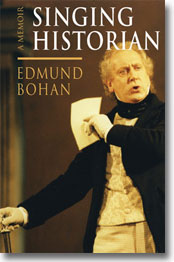 During Edmund Bohan's long singing career - much of it based in Britain - he sang more than 170 different major choral, operatic and orchestral works, and broadcast regularly.

This light-hearted memoir, richly anecdotal and enlivened with pen-portraits of memorable personalities - musical, literary and academic - chronicles with wit and a sharply observant eye a lifetime of achievement as singer and writer. Following childhood in wartime Invercargill inside a close-knit family, he enjoyed schooldays at Christchurch Boys' High School and defining years at Canterbury University. After teaching for a period he left for Sydney and then London, establishing a career as a versatile 'general practitioner' of singing, mainly in concerts but enjoying memorable times with Benjamin Britten's English Opera Group and Kent Opera.

A tour home with the NZSO prompted a permanent return at the end of 1987, where he resumed his 19th-century studies. He has concentrated on writing since then; though he continued to play character roles for Canterbury Opera, Wellington City Opera and the State Opera of South Australia for another dozen years.

This is a warm, funny and avuncular look back at a life.' Christopher Moore, Press

Biographer, novelist, broadcaster, lecturer and international singer Edmund Bohan is the author of 18 books, including biographies of Edward Stafford, James Edward FitzGerald and Sir George Grey; the general histories New Zealand: The story so far and Climates of War: Conflicts in New Zealand 1859 - 1689; and the O'Rorke series of historical novels. The Stafford and Grey biographioes were Montana Book Award finalists.